Ord Mantell is the starter planet for Smuggler and Trooper characters. There are several achievements that require players to be a Smuggler or Trooper to obtain them. Following this guide will award you with all of the achievements on Ord Mantell. 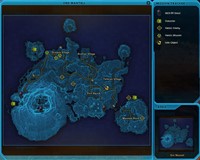 The slow-moving, gentle-tempered Gapillian grazers are herbivores that range across Ord Mantell's grassy plains. Although their massive curved tusks and rock-like hides give them a fearsome appearance, these beasts are among the most peaceful creatures inhabiting the planet. This does not mean they are entirely harmless, however.

Few things are more terrifying than a Gapillian grazer stampede at the height of mating season. With so many of these beasts grouped together, a single spooked grazer can initiate a charge capable of leveling a small town. Unwary travelers caught on foot during these catastrophic panics are rarely seen again.

One of the only carnivores capable of taking down a Gapillian grazer by itself, razoronn beasts are nearly three meters in length and weigh over a thousand kilograms. It is no exaggeration to state that these tusked, fanged beasts present a serious threat to anything smaller than an armored shuttlecraft.

During the early settlement of Ord Mantell, a small farming convoy broke down on a remote plain at nightfall and fell prey to a razoronn pack. The curious predators began "investigating" these intruders in their hunting grounds. The farmers' landspeeders offered no shelter from the ravenous creatures. By morning, all but one of the farmers had been dragged away.

The savrips' bestial appearance leads many to dismiss them as nothing more than monstrous hulking predators that attack on instinct. This is far from the case, as anyone who has gotten close to a savrip can attest. Would a mindless animal really wear a tanned hide and belt made from Gapillian grazers?

Despite their brutish and primitive appearance, savrips are an intelligent species capable of communication. Unfortunately, for the average Ord Mantellian, savrips are actively hostile to other life-forms. Previously content to remain in their home territories, recent surges in savrip attacks have led authorities to speculate on a separatist-savrip alliance, but these claims remain unsubstantiated.

There are three datacrons located on Ord Mantell. These datacrons are Aim +2, Presence +2, and a Red Matrix Shard.

To obtain this datacron, go to Falks Reach Speeder. From there, go across the water, and then turn left and go under the broken bridge. Continue along the beach edge. until you reach a small camp. The datacron is located in the center of the camp, in a crater.

Note: Captain Ethen Remak is guarding this datacron. Defeating him is part of the Liberator of Ord Mantell achievement.

This datacron is located on Savrip Island. Savrip Island contains many strong and elite enemies, as this is an area with several heroic missions. To obtain this datacron, you will need to go around to backside of the island and go up the ramp. Once at the top, turn right and go across the rock bridge. Follow the path, to the end, and then go up the hill to the datacron.

To obtain this last datacron, go to Volcano Camp Speeder. From here, go southwest and follow the beach around the volcano. This is a bit of walk, but eventually will come upon a particular rock formation. Go behind this rock formation and there will be the datacron.

The first droid is located in the southeast corner of Fort Garnik, going up the long flight of stairs to the top. Once at the top, turn to the right. The droid is floating over a tower.

The second droid is located just outside the entrance to the Separatist Stronghold at the top of the volcano.

The last droid is located within the Separatist Stronghold, at the very top near the opening of the volcano.

Hero of Ord Mantell requires that players complete 3 heroic missions. All 3 of these missions are located at Savrip Island, making them quick to complete at one location.

With the war against the separatists turning increasingly ugly, thousands of farmers, laborers and government employees have lost their homes and businesses. Those who remain loyal to the Republic flock to places like Fort Garnik seeking food and shelter. Sadly, there are only so many supplies to go around.

The small shantytowns outside Fort Garnik overflow with impoverished people running out of options. As food, medicine and other basic necessities dwindle to nothing, these refugees resort to desperate measures for survival. Crime and exploitation run rampant, with refugees frequently turning against each other over a half-eaten nutripaste stick.

Centuries of colorful political history and public revelations of high-level government corruption have given Ord Mantell a reputation for untrustworthy leaders. While this attitude is not entirely unwarranted, certain fringe groups believed their world's entire government was little more than a kleptocracy. These activists routinely protested outside government offices, demanding the elected officials be brought to justice.

For a long time, the fringe groups were dismissed as delusional, paranoid or simply troublemakers. It wasn't until an entire governmental cabinet was forced to step down for accepting bribes that ordinary citizens began taking the corruption claims seriously. This was the birth of the separatist movement.

The civil war raging across Ord Mantell affects everyone. The planet's unstable political situation is a bitterly divisive subject, with separatist sympathizers and government loyalists increasingly polarized about how to end the conflict. Some families have been irreparably torn apart when one child joined the separatist movement and another enlisted in the government-backed military.

The separatists remain fanatically committed to their cause, demonstrating no willingness to negotiate or settle matters peacefully. The Ord Mantellian government has summoned the Republic military to bolster the planet's defenses and put down the rebellion quickly for the good of all. Leaders are pessimistic that the separatists will ever surrender.

Ord Mantell was once considered a vital supply depot for the Republic military, but the discovery of new hyperspace lanes virtually eradicated the need to route fleets through the planet's local star cluster. The ordnance engineers and military families formerly occupying the planet transferred to distant outposts, and Ord Mantell was abandoned to farmers.

The old military-grade spaceports were never decommissioned, however, and it didn't take long for private interests to take them over. In addition to corporations like Czerka, less savory factions from the galactic underworld set up shop. Small-time criminal gangs took advantage of the planet's lack of strong Republic oversight and became thriving operations.

These gangsters and corporations have invested heavily in the world's government. Many of Ord Mantell's major political figures are indebted to their corporate and underworld "sponsors," and although some of these leaders have left office in disgrace, it has not discouraged the wealthy and unscrupulous from purchasing political influence. Other politicians have pledged to clean up corruption--rarely succeeding for long, despite noble intentions.

About the Author
Autor: Ohnoto
back to top