The tables on this page were generated using optimizer scripts created by Bant aka Goblin_Lackey. The stats were calculated to give the maximum theoretical DPS/HPS/DTPS for each discipline, however you may wish to alter the builds depending on your play style or what content you are facing in SWTOR. Each table assumes you have a full set of the specified gear.

Madness Sorcerer/Balance Sage is a spec that revolves around using Damage Over Time abilities to kill your opponents, as opposed to direct damage abilities like lightning/telekinesis which focus on burst damage. To successfully play Madness/Balance in 8v8, 4v4 and open world, your first priority is to stay alive. Mobility is key and using your utilities to focus on locking the enemy down, and keeping your distance will allow you to truly maximize your potential.

There is still much debate regarding what the best spec is for Madness PVP. One theory favors going with the heavy up front burst path for solo ranked. Others prefers to go with low burst/Crit but high Alacrity, which gave rise to the 3rd rotation below. Depending on your playstyle, pick the rotation that works best for you.

Comments: For the 2nd rotation option, make sure to time the Force Leech -> Death field combo to hit at the same time. It's pretty easy to do but do that to have the biggest burst you can get. If you want good sustained DPS that you can just spam away from range and want good DoT spread, use the 1st rotation option. If you want high burst that can help kill a target in very little time, use the 2nd rotation option. For the first Force Lightning in both rotations, make sure you get your 4 stacks of Wrath and Fulminating Current before moving on.

As a Sorcerer, your main job is to stay alive. In 90% of ranked games, you'll be the first focused guaranteed. Because of this, your primary goal is not dying. In all the games I've played in ranked, the games that I die first is a game I've lost, guaranteed. The games where I die after we've dropped one of the enemy team, there's a 50/50 chance of winning or losing and the games where I'm the last man standing is a 90% chance to win.

If it's the rare case where you're not focused first, then it's time to show what you've got. Utilize all the tactics in your arsenal. Kiting, Line-of-Sighting, as well as your class abilities like Force Speed, Force Barrier, and your numerous CC abilities. Typically, in the games you're not focused first, if you're not pulling top damage then you're not utilizing Madness to its full potential. When left alone to ‘Free Cast' (successfully pulling off your rotation consistently without any enemy focus), Madness Sorcerers have some of the highest DPS potential of any class in its current state.

Emersion is a must have utility

Force Speed + the Emersion utility is probably my most used escape move in ranked and it has saved my *** countless times. Plus, there's always something satisfying about watching a Jugg mindlessly slash at the air while you sprint to safety.

Use your Force Barrier strategically

Sometimes, that means saving it for the very last second before you die. Sometimes that means using it when you're being heavily focused, even though you have 100% health. This can often play to your advantage, as an opponent has a 50/50 chance of blowing their damage increasing cooldowns to open up on you early.

In games where I'm facing high burst DPS classes like Marauders and Assassins, I sometimes pop my Force Barrier as soon as they're locked on to me and starting their rotation, as that burns out their burst on my invincibility shield so that neither I or my team take that high damage. After their burst is wasted on my shield or they've wasted their time striking against my bubble, which inevitably wastes their bursts, I kill them pretty easily.

Using your Barrier is a skill that takes practice to master. It's a tactical ability, and is not a set rule that it must be used in X situation. You just have to watch, and learn, your enemies abilities, and typical patterns/rotations. Then you'll be able to easily determine when to use your barrier, to both stunt the enemies DPS potential, and save yourself from certain death.

to successfully playing Madness. You're one of the squishiest ranged classes in the game. Staying away from enemies, and using your 30 to 35 meter attacks to your advantage is key to winning most fights. Height is also a significant advantage for ranges classes like yours. In maps like Tatooine Canyon, Alderaan Civil war, or Quesh Huttball, stand on the edges. Stay out of the enemy's area of focus and spam away.

This goes hand in hand with #5. Take full advantage of the level design used in your maps. In maps like Makeb Mesa, or Orbital Station, it's the smart move to not take the high path first. Knockback or pulls easily separate you from your teammates, taking you out of the fight for sometimes crucial seconds, leading to a loss. In maps with two or more levels, like the ones I mentioned, I'd suggest that your team take the direct route and charge the enemy right out of the gate. Engage them and put them immediately on the defensive. This brings me to my next point.

Get your attacks out first, in all warzone situations, as soon as possible to try to catch the enemy with their pants down. The longer you wait, or hesitate, the more opportunity you're giving the enemy to prep, organize and get the drop on you. Which means that you'll more than likely lose. Get the first attacks out, attack them as soon as possible and try to catch them with their pants down. The more you wait, the more they prep and organize which means you are generally going to lose.

Play to your Team's Strengths

Lastly, I'm strongly of the opinion that Sorcerers are strongly dependent on their team composition. If you're stuck with a bad team, more than likely you're facing a loss. If you've got a good team with competent players, you'll probably win. If you've got an average team, then you could easily carry the team to victory. That is a rare situation however, which only happens once in a blue moon. This is all less true in 8v8 warzones. One good player could turn the tide of a battle.

Note: These parses are from 4.0 but are still relatively applicable in 5.x.

5,638 DPS, for the time frame of an average ranked match 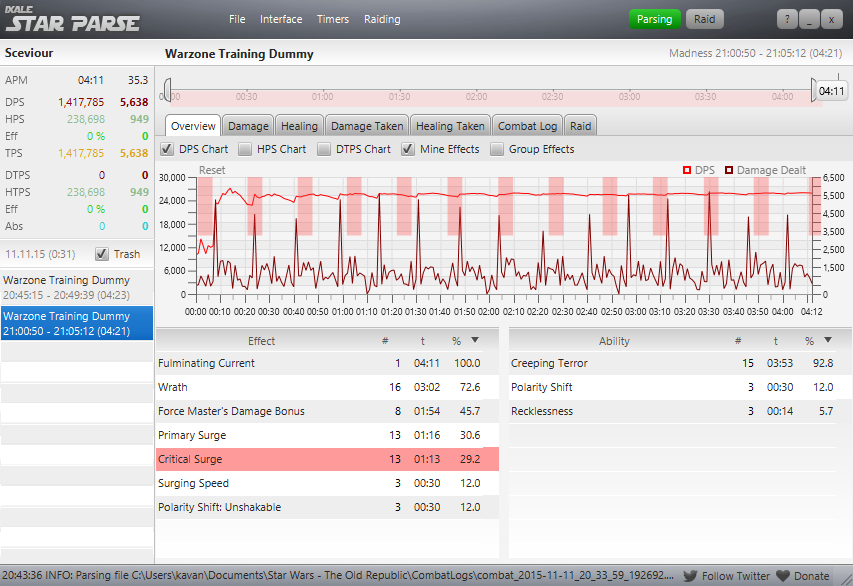 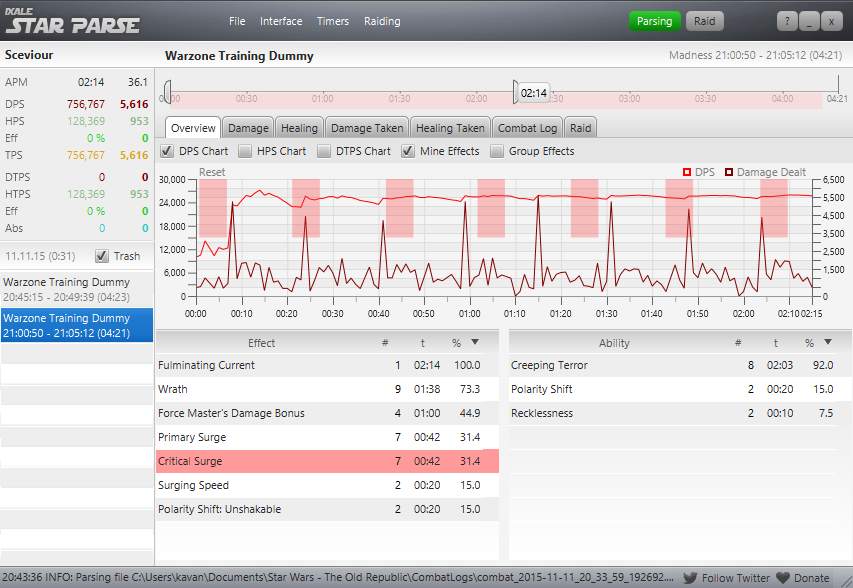 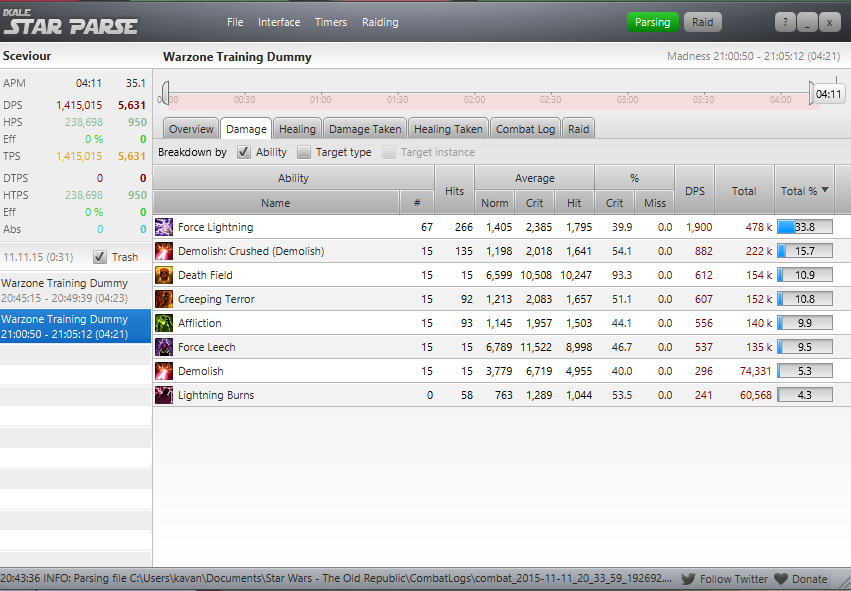 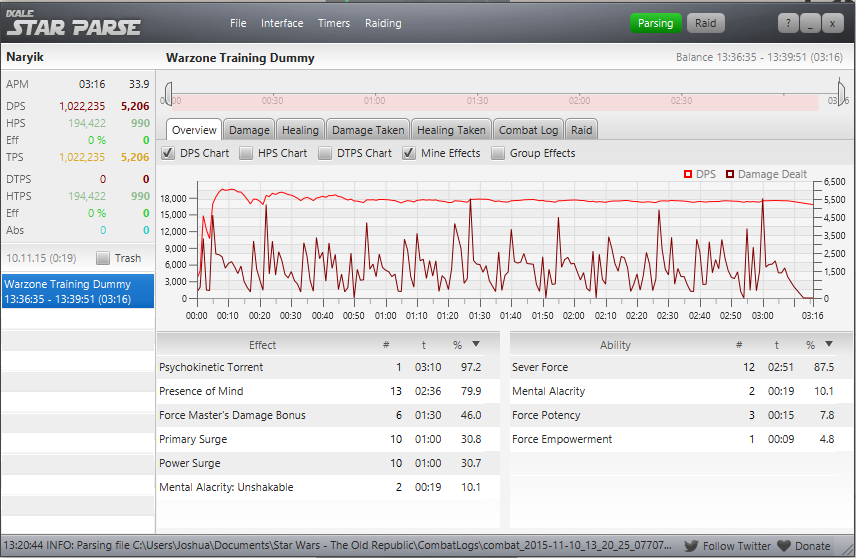 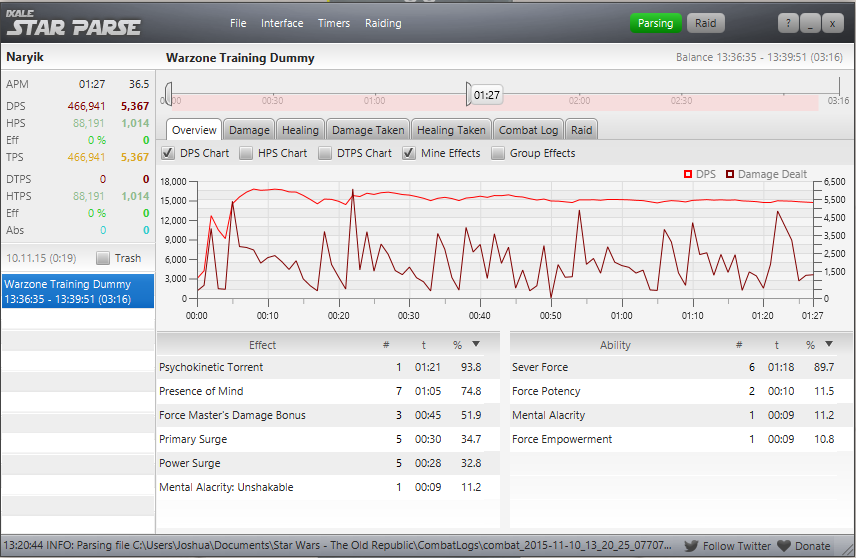 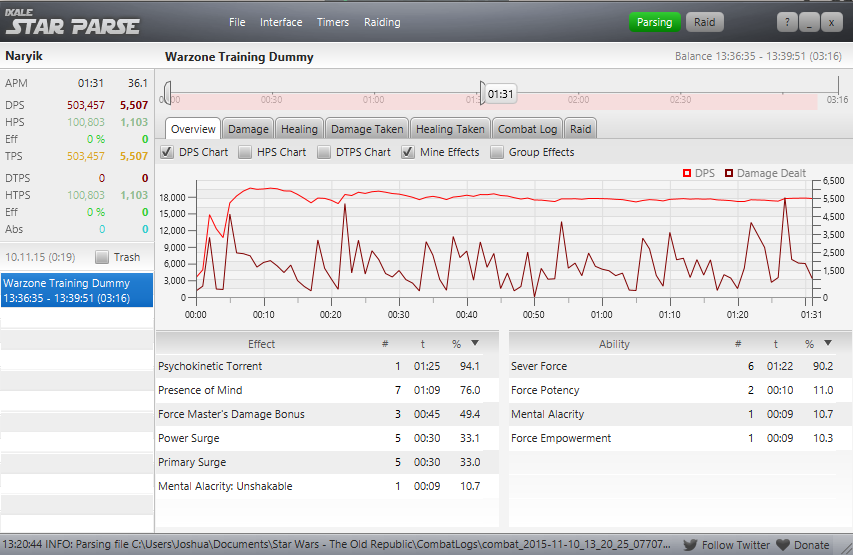 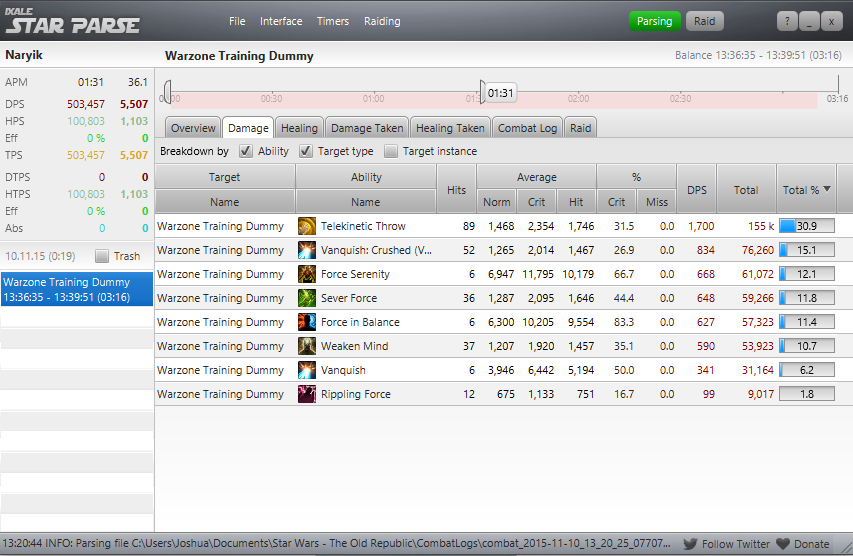 The high crit build is focused towards the most up front damage to kill 1 target as quickly as possible whereas the 2nd build, for high alacrity is built for DoT spread and spreading out as much small damage to as many targets as possible.