The Alliance Proving Ground is a new, unique Warzone which is highly tactical and favors more coordinated teams who play objectively and are aware of the map and their surroundings.

This guide is based on PTS testing but is accurate for launch. The only difference between the last PTS test session and the Game Update 4.3 launch will be bug fixes.

If you like this guide, be sure to visit the author's blog, Xam Xam Says.

The Alliance Proving Ground is basically a King of the Hill-style map. There are two teams, Team Gold and Team Purple. The first team to get 600 points wins. To earn points, you must capture Control Points by standing in them for 4 seconds, and then hold them by having at least 1 person remain inside. They spawn randomly in 5 different parts of the map, and in each round there are a varying number of Control Points available to capture.

Additionally, there are Battle Mods, which can aid your team by increasing the points you gain or by stopping the other team from gaining points.

The key to understanding and excelling at this new Warzone is to learn and familiarize yourself with the map.

Below is the map of Alliance Proving Grounds which shows where everything of note is. This Warzone is, for the most part, on one level and does mimic the Alliance Base from KOTFE to some degree. 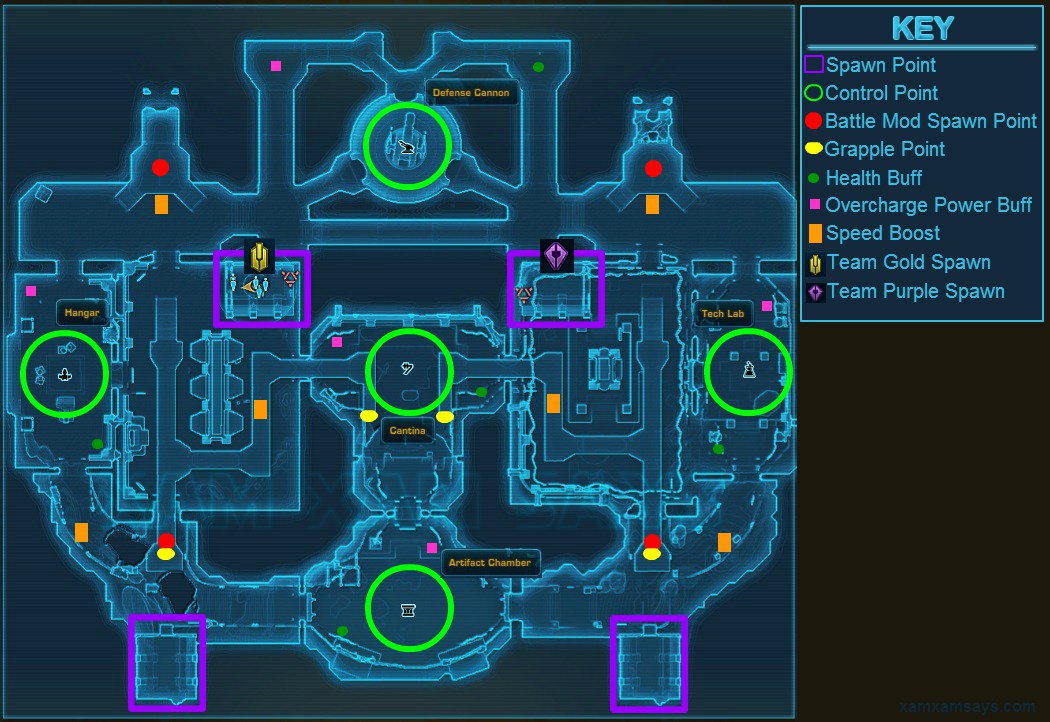 The Control Points align with the cardinal points of a map and are often referred to as such.

Most of the map is "indoors" and is basically a re-purposed cave (like the Alliance Base in KOTFE), mostly of level elevation. The Artifact Chamber Control Point however is "elevated" above the rest of the map and is accessed by the pathways on either side which slope up. If you head north from the Artifact Chamber, you end up on a stage which "overlooks" the Cantina Control Point. From the stage, you can jump down to the Cantina Control Point or get to suspended walkways via Grappling Hooks.

There is an outside area where the Defense Canon Control Point is which basically consists of walkways suspended on the edge of a canyon (like how the Alliance Base is situated in KOTFE). There are also elevated walkway platforms which have Battle Mods on them (as indicated on the map).

This is the Scoreboard for the map. It not only shows how many points your team and the enemy team has but also shows which Control Points are active or captured by which team. It also "visually" indicates how much time the Control Points have until they"re despawned. 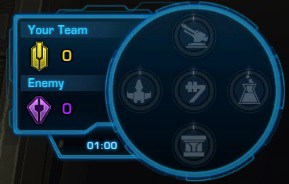 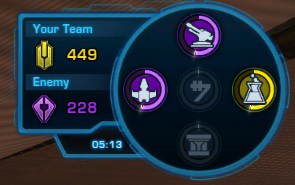 All you have to do to capture a Control Point is to stand in it for 4 seconds without anyone from the other team standing in it. The number of players standing inside a Capture Point is irrelevant and does not affect how fast your team earns points. For each second a team holds a Control Point, they get 1 point.

There must always be someone standing in a Control Point to hold it for their team. If everyone leaves the Control Point after capturing it, the team loses control of it (after a 4 second grace period) and it goes back to being an uncontested Control Point. 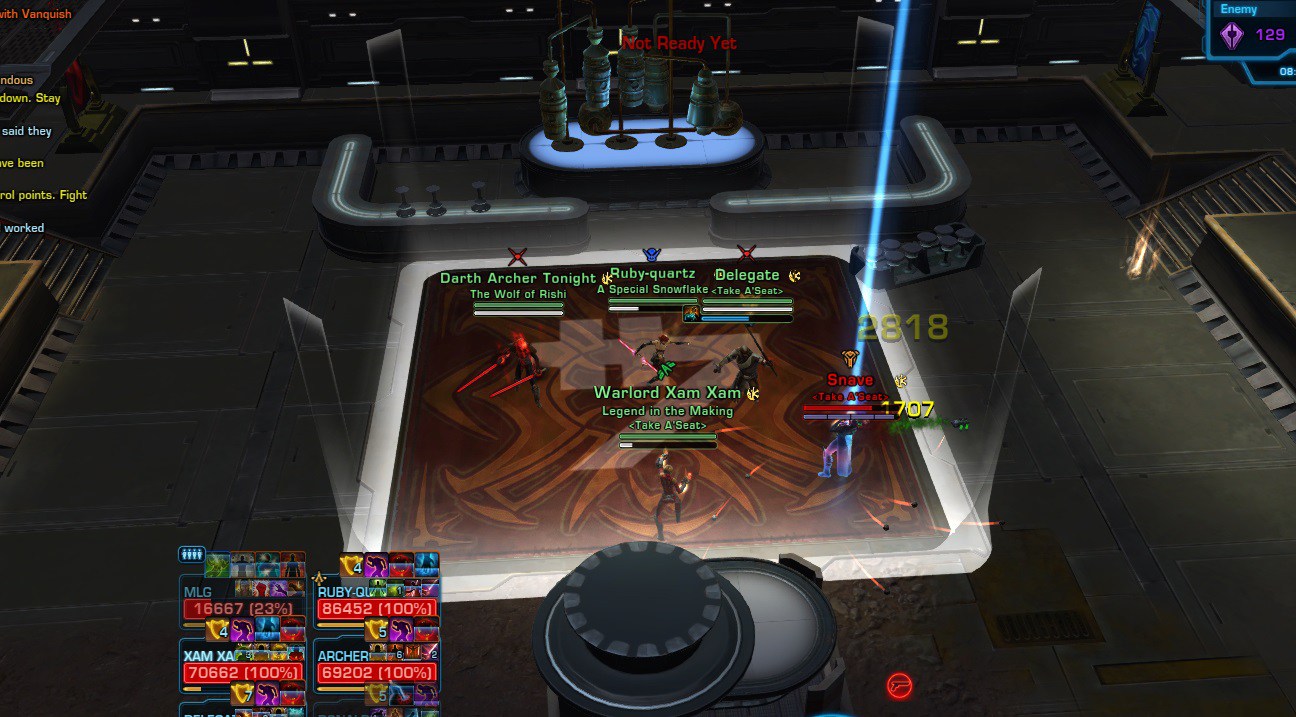 Unlike other Warzones, when you get killed, you do not respawn at a spawn point straight away (and get stuck behind a door). Instead, you lay on the ground until the respawn timer runs out, then you are automatically resurrected at one of the Spawn Points indicated on the Map above. The timer (as far as I can tell) runs on a 14 second window. So every 14 seconds, players who've been killed in that 14 second window will get automatically spawned at one of the 4 Spawn Points at random.

There are four different types of Battle Mods, which spawn in four different locations (see the map above) and are randomised meaning you could end up with any of them when you pick up a Battle Mod from a spawn location. All Battle Mods have a 3 second cast time.

A player carrying a Battle Mod will have a "beam" protruding out of them with a symbol spinning around above their head, as pictured below (colour will depend on which Battle Mod they"re carrying). A player can hold a Battle Mod indefinitely until they either die, use it or pass it to another player. 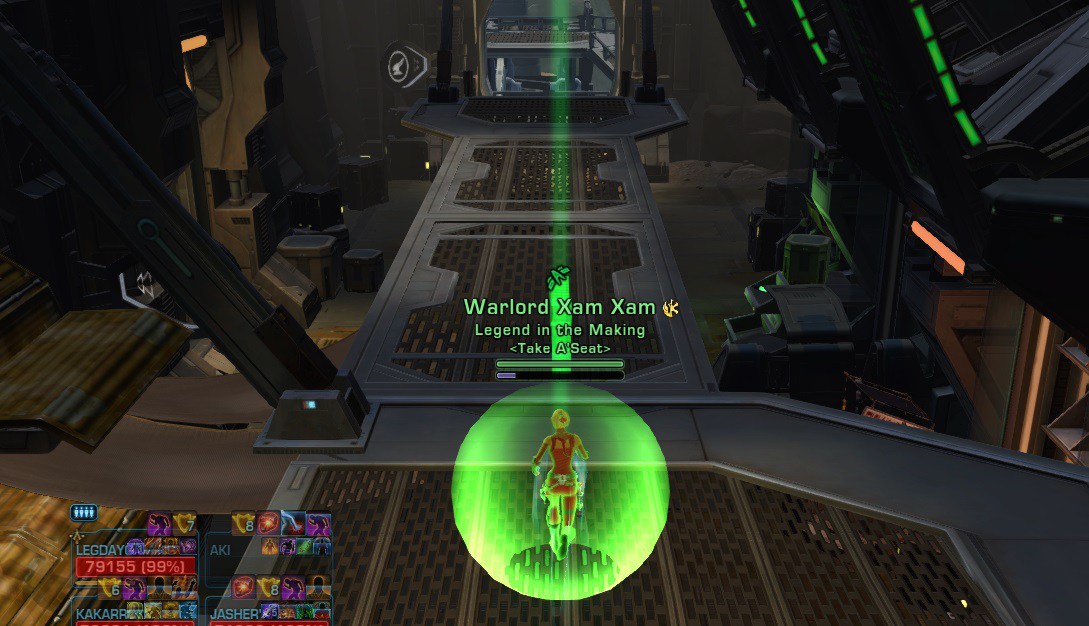 When a Battle Mod has been used on a Control Point, it will show up on the Scoreboard. In the image below, you can see that the Artifact Room Control Point has both a Double Point and a Speed Up Mod on it. 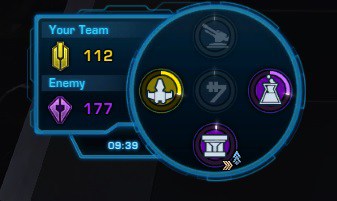 Additionally, if you kill a player who is carrying a Battle Mod, the Player closest to them gets the Battle Mod.

If you see someone on the enemy team attempting to place a Battle Mod on a Control Point, you can stop them capping by using a knock back, stunning them or using your interrupt. Attacking them doesn"t stop the Battle Mod channel.

When you pick Battle Mod (Slice), a temporary UI pops up (like when you get the ball in Huttball). It gives you two options. You can either place the Mod in a Control Point (when in the appropriate area/circumstance the UI lights up when you can use it) or give the Mod to another player. You have to select a player to hand off the Battle Mod (Slice) and be within 10 meters of them.

How to get Objective Points

Currently, there a couple of ways to get Objective Points:

Unfortunately unlike other Warzones, there are very few line of sight (LOS) points for healers near the Control Points. There are (very) select Control Point spawn locations where there are objects or the environment where you can LOS damage but you have to sacrifice being inside a Control Point which could mean losing a Control Point. Depending on how many teammates there are however, it may be beneficial to be outside the Control Point. But it is crucial to be on standby to get inside the Control Point if your team is knocked out of it (this works for ranged DPS classes too). Again, this will be heavily situation dependent. For the most part healers are out in the open with little protection from incoming damage. Although if you have a pocket tank you"ll ace this map.

Another important thing to note for Stealth Classes is they CAN NOT stealth while holding a Battle Mod. However, you can currently pass a Battle Mod to a stealthed player (this may be fixed on live).

Ranged DPS/Healers: If there are already a couple of your teammates standing inside a Control Point stand outside of it so if they get knocked out, you can run in and keep the Control Point for your team.

Thank you for reading the guide! If you have any tips, suggestions or questions about the guide, let us know/ask!

A special thank you to Jerba and Moonstorm for helping and assisting with this guide!

About the Author
Author: Xam Xam
back to top