A guide to all of the hidden easter eggs in SWTOR.

Secret boss from the 16-man hard/nightmare mode operation "Terror From Beyond." A Dreadful Amulet (guaranteed drop from 10-stack Dreadtooth) is required to spawn The Dreadful Entity. For more information, view our Dreadful Entity Guide. 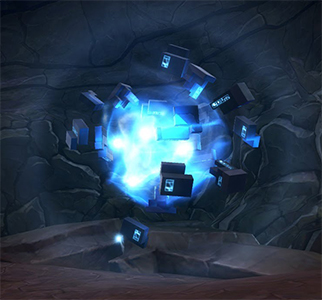 Secret boss from the 16-man hard/nightmare mode operation "Scum and Villainy." A Dreadful Orb (guaranteed drop from The Dreadful Entity) is required to spawn The Hateful Entity. For more information, view our Hateful Entity Guide. 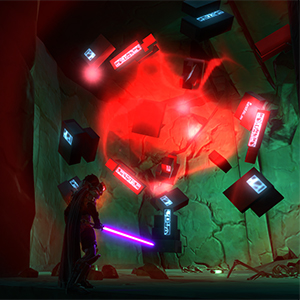 Let the Wookiee Win: When in Nem'ro's Palace Cantina on Hutta you can see a Wookiee and his protocol droid opponent (whose arms have both been ripped off) contemplating a game of Dejarik. This is a reference to R2-D2 and C-3PO learning an important lesson from Han Solo while playing Chewbacca in Dejarik aboard the Milennium Falcon.

Han Shot First: Inside Nem'ro the Hutt's Palace Cantina on Hutta you can find a Human Smuggler named Hun Duo conversing with a Rodian Quickshot named Greepo. This is a reference to the encounter between Han Solo and Greedo in the cantina in Mos Eisley.

326-3827: While getting the Cunning Datacron on Nar Shadaa, you will find yourself inside a garbage incinerator. To escape, you will need to choose a code in a maintenance console to open the energy door. The correct code is 326-3827, which just so happens to be the number of the Trash Compactor unit that Luke, Han, Chewbacca, and Leia were trapped in on the Death Star.

Bounty Hunters: On the Bridge Deck of the Ziost Shadow (Imperial Fleet) you will see a group of NPCs. In this group is an imposing figure in black armor (Darth Vader) talking to a stocky man with a headwrap (Dengar), a droid that is rather tall and thin (IG-88), a person in Mandalorian armor (Boba Fett), another droid that looks more like a protocol droid than a battle droid (4-LOM), a Trandoshan in a yellow flight jacket (Bossk), and a Gand in a cloak (Zuckuss). This is a reference to the scene where Darth Vader is instructing the bounty hunters to capture Han Solo alive.

Heroes of the Republic: There is a Republic quest on Corellia in Axial Park to Restore the Statues of eight Republic heroes that have been deactivated by Mandalorians. They are none other than the non-droid heroes from KOTOR: Bastila Shan, Carth Onasi, Canderous Ordo, Juhani, Zaalbar, Mission Vao, Jolee Bindo, and Revan.

A Night at the Roxbury

What is Love?: In Nem'ro the Hutt's Palace Cantina you can see two customers and a dancer interacting in a parody of the recurring Saturday Night Live skit "The Roxbury Guys" and the spin-off 1998 movie "A Night at the Roxbury," featuring Will Ferrell and Chris Kattan dancing to Haddaway's song "What is Love?". 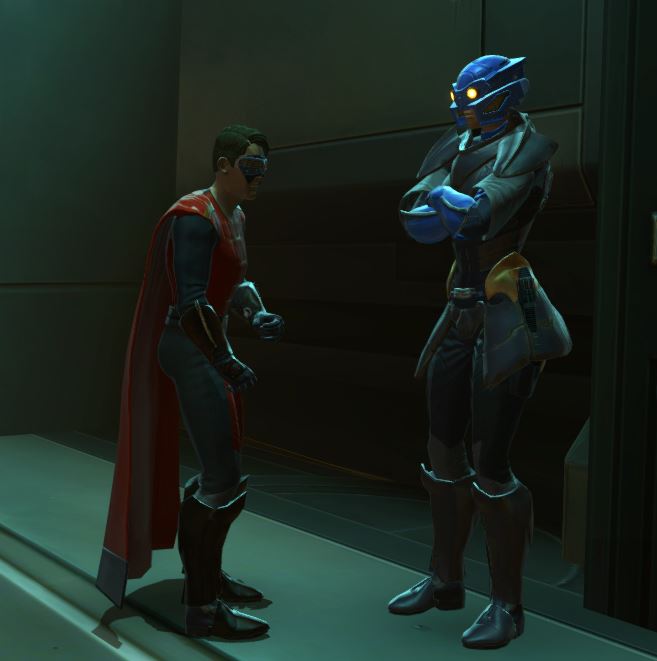 Master Chief: While in Talloran Village, in the hut with an NPC for the Scavenger Hunt quest, look for a table with a poster of what greatly resembles Master Chief from Halo. 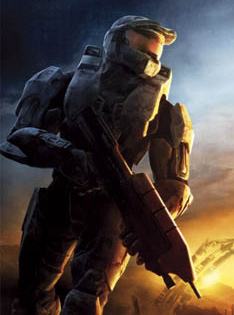 Subject 13, Subject 16: During the Subject 13 quest on Belsavis you will encounter Subject 13, an NPC trapped in a Rakata mind trap who is in a similar situation to Subject 16 (Clay Kaczmarek) from Assassin's Creed: Revelations, who is trapped as a consciousness within the Animus. Both individuals at one point wish to find a body to transport their consciousness back into the real world.

Lara Croft: On Alderaan you can find a Sith Lord NPC named Ar'al Tforc (German version), which is Lara Croft spelled backwards. He has since been renamed Ar'al Anec in the English version.

PLEX: In the Esseles flashpoint you can find an NPC named Navigator Plex, which is a reference to PLEX - a currency used in EVE Online.

Grand Moff Kilran: So much trouble from one Republic operative. It almost strains credulity.

Darth Malgus: You dare face me alone? How bold... and foolish.

Triggered by facing Darth Malgus as a Sith Inquisitor:

Triggered by facing Darth Malgus as a Sith Warrior:

Darth Malgus: The Emperors Wrath. Fitting that we meet within his Chambers. He was kind enough to keep his throne warm for me.

Triggered by facing Darth Malgus as an Imperial Agent:

Triggered by facing Darth Malgus as a Bounty Hunter:

Triggered by facing Darth Malgus as a Jedi Knight or Jedi Consular:

Triggered by facing Darth Malgus as a Trooper:

Darth Malgus: Your fleet has failed you, Major.

Triggered by facing Darth Malgus as a Smuggler:

Triggered by facing HK-47 with HK-51 as your companion (Empire):

HK-51: Reassurance: This an inferior HK model master.
HK-47: Objection: Your HK is in error. I am fully upgraded to exterminator standards. I am a paragon of brutal efficiency.

Triggered by facing HK-47 with HK-51 as your companion (Republic):

Jumping into the Sarlacc pit in the Dune Sea on Tatooine grants the title "Worm Food."

You've seen too much.

The Droids You're Looking For

Completed all of the following Macrobinocular achievements for finding MCR-99 droids.

Life of the Party

Defeated 500 enemy players while partying with the Party Jawa.

Defeated 100 enemy players who were partying with the Party Jawa.

Defeated 100 Jawas on Tatooine while partying with the Party Jawa.

Special thanks to Luckygunslinger of The Ebon Hawk for the Hateful Entity image.