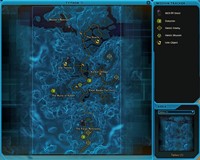 Guids are hoofed quadrupeds indigenous to Tython. Notable for their muscular forelegs and the distinctive tufts of hair on the shoulders, back and chin, they are typically encountered grazing alone or in small herds. Guids are not particularly aggressive, but if threatened, they are capable of causing injury or even death with their massive forelegs and powerful jaws. Attempts to domesticate guids have proved unsuccessful due to their stubborn and occasionally irritable nature.

Jedi Master Silvarte has taken to labeling Padawans with a particularly lumbering lightsaber stance as devotees of the "Form of the Guid." At least one of these Padawans--since proclaimed a full Jedi Knight--has taken this mild insult to heart, developing several lightsaber techniques inspired by the study and observation of these strange creatures. Master Silvarte considers this a mark of his success as a teacher.

If food suddenly becomes more abundant in a region, a horranth matriarch will lay hundreds of eggs, causing her brood's population to explode. As their numbers multiply, the beasts grow bolder and more aggressive. Unchecked, the brood will continue to spread until they finally exceed their food supply, at which point the matriarch will suddenly stop producing eggs. Unfortunately, this return to normal population levels typically only happens after the brood has thoroughly devastated the region.

Fierce feline hunters, manka cats are believed to have originated on Alderaan but can now be found on a number of different worlds due to their desirability as exotic pets or trained guardians. It is no surprise that these accomplished hunters have thrived in virtually every ecosystem into which they have been introduced. Sleek and powerful, they have the speed to run down smaller prey, while their massive protruding tusks and claws also allow them to tackle much larger targets. Often traveling in prides, even a lone manka cat can be dangerous, and extreme caution should be exercised when in their territory. Despite the risks, manka cats are sometimes hunted for sport and for their tusks and teeth, which are said to possess healing properties.

The ruins of Kaleth are overrun with various squads of ancient--and hostile--war droids. A deadly remnant of Tython's mysterious past, the original purpose of the droids has been lost in the mists of time. Some speculate they were once guardians, programmed to protect the powerful secrets of Tython's original Jedi inhabitants. Others believe the droids were used for combat training by the order shortly after the creation of the first proto-lightsaber. A more sinister theory suggests the droids were somehow involved in the destruction of Kaleth itself. Whatever the explanation, one fact is not in dispute: The droids will attack any living creature that dares to enter the territory they still fiercely patrol.

Deceptively aggressive, uxibeasts are mammalian herbivores with a multitude of horns covering their shaggy bodies. They are believed to originate on Tython, but have been found in small numbers on other planets--evidence of the migration of the first Jedi, long ago. They typically travel in herds and are quite capable of fending off would-be predators; the pointed spines on their backs prevent attackers from pouncing on them, and a charging uxibeast is capable of inflicting all kinds of bodily harm.

Uxibeasts are generally ill-tempered and unpleasant around people, but they can be tamed--to a degree. Domesticated uxibeasts will imprint on a single individual, whom they are unquestionably loyal to, while remaining hostile toward everyone else.

Wingmaws are a biological oddity, an evolutionary branch of Balmorran life that developed on an isolated chain of islands; it was only six hundred years ago that wingmaws were accidentally carried to the mainland by unwary explorers. The creatures maintain insect-like social structures despite their reptilian appearance, frequently traveling in groups and favoring open spaces to dark caves.

The wingmaw population on Balmorra has increased rapidly since the Imperial invasion, as the creatures' primary predator--the Balmorran maweater, another transplant from the island chain--was completely wiped out during the bombardment. Unchecked, the wingmaw has become a threat to Imperial and resistance soldiers alike and wreaked havoc on the rest of the Balmorran ecosystem. They are bold carnivores and scavengers, happily swarming on a lone fighter or an unprepared convoy.

There are three datacrons located on Tython. These datacrons are Endurace +2, Willpower +2, and a Blue Matrix Shard.

This datacron is located at the mouth of a cave on top of a cliff, which can be seen from the road going towards Forward Camp. Starting at the Forward Camp, head southeast out of the camp. Follow the road around to where the road splits.

There will be a ravine to the left. Drop down into it, the cave entrance is towards the west. Go all the way through the cave, which exits out to the datacron location.

To obtain this datacron, go back to the Forward Camp area and head west. You will need to follow the road to the back of the Ruins of Kaleth. Once there, follow the stairs up to the top. Once at the top, turn right and go through the opening in the ruin walls. To the left is a ramp to the back area.

Turn right to see a fallen ruin piece that has made a bridge across a small valley. Go across the bridge, but beware that part way across it gets thin. Once across, you should see the datacron towards the east, sitting at the base of a statue.

To obtain the last datacron, go to the southern area of The Forge Remains. After exiting the cave to this area, go up the western side of the ruins. Once you make it to the top, continue south for a bit and then there will be some broken arch ruins to the west.

Go through these arches as far west as you can. There is a pathway that appears hidden to the south. Follow this path to an area of ruins filled with enemies. The datacron is tucked away on top of one of the ruins in the back corner from where you enter.

The first droid can be viewed from the taxi station in The Gnarls. 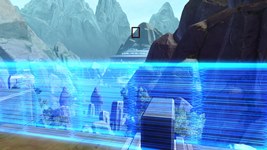 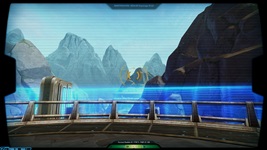 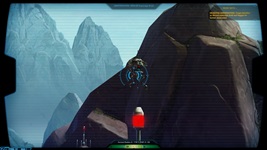 The second one is located over the Jedi Temple, and can be viewed from the courtyard in front of the temple. 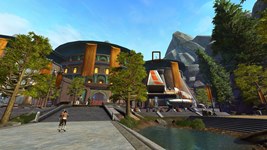 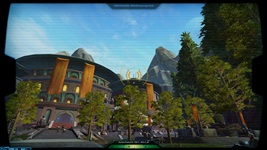 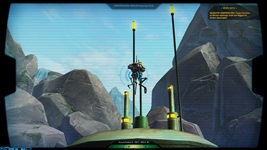 The final one is located in the Forge Remnants, and is located on the west side, going up the first set of stairs in the area. 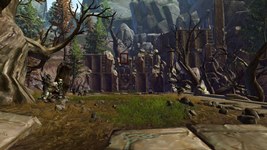 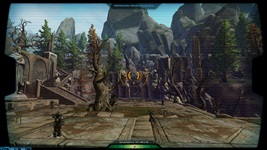 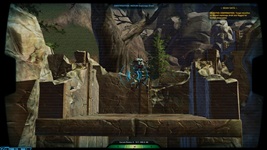 Hero of Tython requires that players only complete 1 heroic mission. However, this mission is only available to Jedi Consulars and Jedi Knights.

To complete Loremaster of Tython, players must find all 4 lore objects on Tython. A Jedi Consular or Jedi Knight are required for the lore objects of Holocron and Jedi Weapons, as they are awarded through the class stories of these classes.


This lore object is located inside the Jedi Temple. The object is a chair within a study room.


This lore object is located in The Gnarls. The object is at the base of an ancient statue.

Holographic chronicles--more commonly called "holocrons"--are sophisticated data storage devices capable of cataloging vast amounts of complex information within their crystal lattice structure. Frequently used by both the Jedi and the Sith to preserve the wisdom of ancient Masters and Sith Lords, holocrons can only be accessed by Force-sensitive individuals. Some are "merely" repositories of incredible lore, while others possess virtual personalities of their own, modeled after their creators.

Many believe it was actually the Sith who first developed holocron technology, as the oldest known examples are all relics of the dark side. Interestingly, Jedi holocrons take the form of a glowing cube, while Sith holocrons are usually pyramid-shaped. Some scholars claim the six-sided cube of the Jedi represents a more modern and advanced version of the original four- and five-sided pyramids favored by the Sith, though hard evidence for this idea is scarce.

The lightsaber is the iconic symbol of the Jedi. Through the Force, it becomes an extension of the wielder; serving as both a powerful tool for defense and a devastating weapon against the dark side. Padawans, however, typically use electroblade training swords until they have proven themselves worthy. Only then can a Padawan make a pilgrimage to the Forge on Tython to construct a lightsaber in accordance with ancient Jedi traditions.

Lightsabers come in both single- and double-bladed forms, and their blades can be a variety of colors. Blue, green and yellow are the most common among the Jedi, though there are examples of other hues such as magenta and cyan. The color of a given lightsaber's blade is largely determined by the crystals in the hilt that power the weapon. Different crystals confer varying properties on the weapon, allowing each lightsaber to be customized by its creator.

In the aftermath of the Sacking of Coruscant and the establishment of peace with the Empire, the fate of the Jedi Order was uncertain. With their temple looted and in ruins and relations with the Republic government at a new low, the Jedi left the Republic capital to establish a new temple on the rediscovered world of Tython--the homeworld of the first Jedi.

By returning to their ancestral home, the Jedi hoped to reconnect with the beliefs and ideals of those who founded the order twenty millennia ago. They sought to reclaim forgotten knowledge and wisdom left behind by ancient Masters, scouring the planet for holocrons and Jedi artifacts to replace those that had been lost during the destruction of the temple on Coruscant. They began training a new generation of students and began to mend relations with those who blamed the Jedi for the destruction of the war.

On Tython, many young Jedi believe they have rediscovered the original purpose of their order: to stand firm against the servants of the dark side. Removed from the machinations and concessions of politicians and bureaucrats, the Jedi have once again become beacons in the eternal struggle between light and dark.

The birthplace of the Jedi Order was lost for many thousands of years when known hyperspace lanes leading to the region collapsed--a fate that has befallen many worlds in the unstable heart of the galaxy known as the Deep Core. After the destruction of the Jedi Temple on Coruscant, Satele Shan embarked on a search to rediscover the lost world. Guided by the Force, she ventured into the Deep Core and re-emerged with astrogation charts detailing a new series of stable hyperspace lanes. Tython was once again connected to the rest of the galaxy.

Initial exploration of the planet took months, as Jedi scouts combed the surface for clues to Tython's history. Lives were lost--to a troubled landscape, to the Flesh Raiders and to forces unknown--but soon, the Jedi Council established a new temple on the world, determined to rebuild Tython and return it to humble glory.

About the Author
Author: Ohnoto
back to top