This time in our series of "The Community Content Creators of SWTOR" we're featuring the duo of Max and Sema! Max and Sema are co-hosts of a podcast that is nearing the 300-episode mark. They meet once a week to talk about news, updates, deep-dives, lore, showcase some gameplay, and more! On top of their podcast, they're both co-leaders of Alea Iacta Est, or AIE for short, an organization that spans a multitude of games. In Star Wars: The Old Republic AIE has been alive and active since the game's launch on both Republic and Imperial sides. With both their podcast and Guild responsibilities, Max and Sema are constantly looking for ways to engage their following and guildmates. 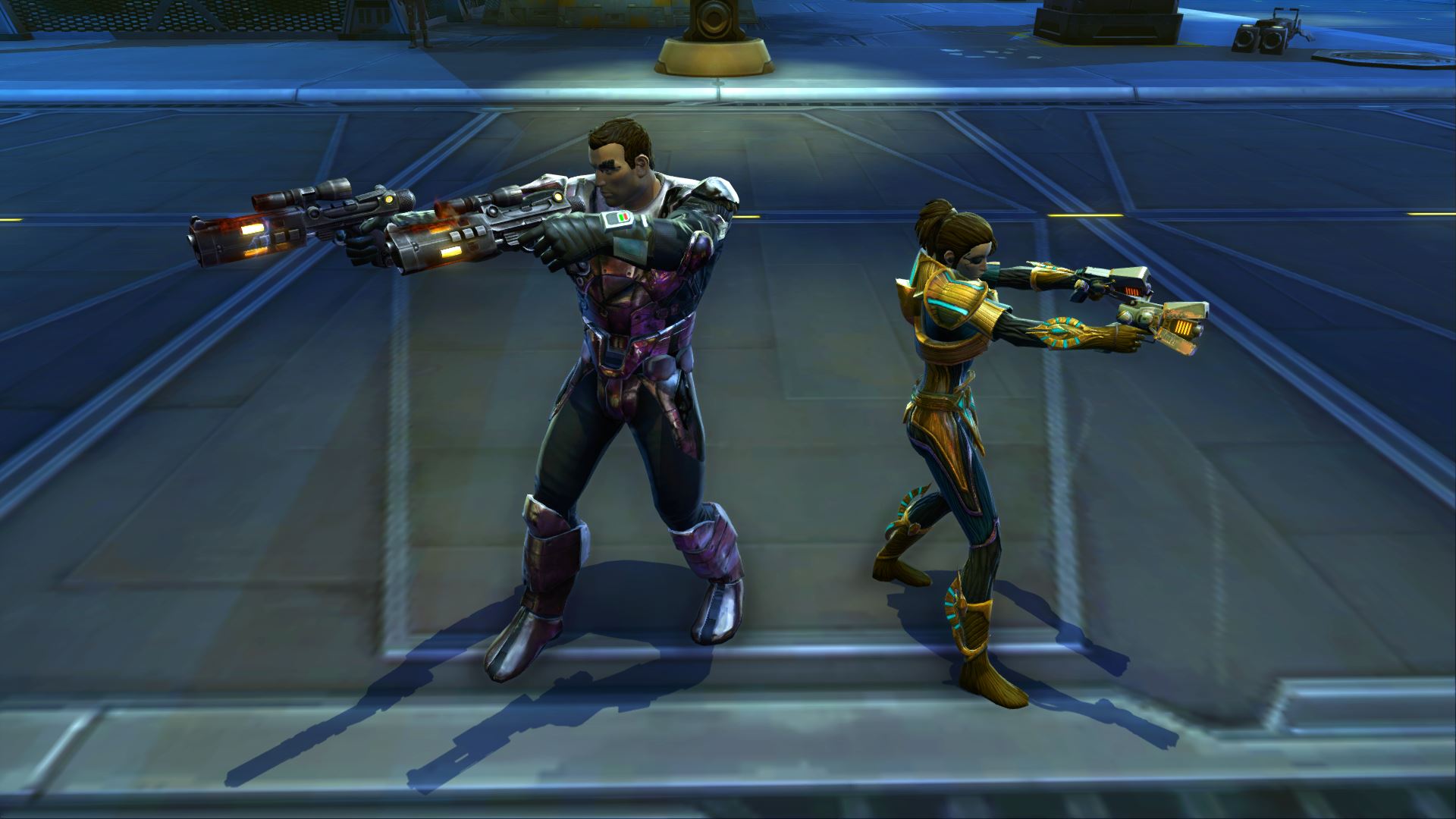 Sema: I'm a long time MMO player and when I heard about a Stars Wars MMO, I just loved the concept. I jumped right in at the opening. No beta for me, but I was hanging out the night before it went live clicking away. I joined with a small group of friends. At first, we made our own guild, but having heard of AIE from other games, we decided to join up and that is where I've been ever since.

Max: I've played MMOs for many years, going back to the launch of Ultima Online. I've played at most of the major games that have come and gone since then and our guild is based around a handful of today's top MMOs. I got involved in the SWTOR community while it was under development. I played in beta and non-stop since launch. I've always been a Star Wars fan and the fully voiced and acted story, which is still a key differentiator for the game, had me hooked early. At launch, we started the SWTOR AIE guild with a bunch of awesome people and that, along with continuing to be a fan of the game, has had me locked in since then.

I know this may be hard for two veterans of SWTOR, but what memory throughout the history of the game really sticks out for both of you?

Sema: I will always remember my first character, my sage, arriving with Qyzen Fess at Coruscant. As we looked out over the city, he said, "Is cold world. Both full and empty." That is just so Qyzen. He was this fierce warrior who took the brunt of the damage in every situation and yet he was also so philosophical. Even though my main today is a mercenary and I run almost all the time with Shae Vizla, I will never forget Qyzen.

Max: While the MMO bits are what keep me playing, the story, cut-scenes and voice acting is a big part of the uniqueness of the game. My favorite is my first time through the Chapter 1 story on my Bounty Hunter at launch. The feel of bounty hunting as a business, getting your first companion, the journey to Dromund Kaas on the Black Talon, The Great Hunt. Before SWTOR, I didn't think Star Wars gaming would really work without getting to be a Jedi/Sith. The pre-launch trailers and the Chapter 1 experience on both my Bounty Hunter and Trooper changed that in a big way. I always knew hokey religions and ancient weapons were no match for a good blaster and that experience proved it true.

How did your Guild, Alea Iacta Est, come about?

Max: Our overall guild started back in 2007 as an MMO guild and was one of the biggest guilds in the world in those early days. The name, Alea Iacta Est, is a Latin phrase meaning "the die has been cast" and is an obvious reference to the D&D roots of lots of MMO gameplay.

Sema: After 2007, AIE quickly started expanding into other games and in 2011 our SWTOR guild was formed pre-launch. We had a huge debate at the time on which faction to base the guild in. We ended up going down the route of a sub-guild on both sides, which has its challenges but has been really fun for us and continues to work well. We all have characters on both sides and switch our weekly focus each week to the opposite faction for things like guild events and conquest, so they all get equal time.

What got you into podcasting?

Sema: Our main goal with the podcast has always been to connect with people that play the way we like to play, to get the word out about the game in general, and about our guild in particular. We figured that the more people that heard about SWTOR and what we were doing, the more people we'd have to play with. For this reason, we have always been committed to just being ourselves and not trying to fit any particular mold.

Max: With that goal in mind, we also wanted an outlet for some of the epic conversations and debates Sema and I would have in game on ops nights, which mostly were me spouting some opinion and Sema explaining why it was hilariously wrong. Back in 2012, I had co-hosted a couple months of episodes of an older podcast, The Cantina Band, which started before launch. That experience helped and our first public episode (yes there is a secret beta test episode that never aired) was on August 26th, 2013. We've continued almost every week since then and have done over 290 episodes.

What are your tips for making a guild successful?

Max: I'd say there are maybe five tips we'd give in the model of "dodge, duck, dip, dive and dodge".

As avid SWTOR players, I'm sure you were both excited about the ‘Onslaught' announcement. Did any parts of the announcement really catch your interest?

Sema: I want to see what Malgus does next. He definitely looked alarmed when the subject of being "prepared" for his next assignment came up. What is scaring him? And will it scare me too? I'm pretty sure it will. Also, I definitely want to know more about the two characters we just met: Major Anri and Tau Idair. Aside from story points, though, I'm looking forward to revisiting Corellia. I think adding content to existing planets is a great idea and would like to see it happen to more of our favorite planets. The new gearing system has certainly piqued my curiosity. I'm eager to see what kinds of special use sets I can build. And lastly, and probably most importantly, I'm excited about the new operation. Czerka is one of my favorite bad guys, and I'm sure their antics will be entertaining as we kill them.

Max: I really like the sound of the Spoils of War approach to gear sets and the new tactical items. I also really like the look of the concept for Mek-Sha since it's so unique. I hope it gets used extensively. That said, I'm most excited about the new operation on Dxun. As a group content focused guild, operations are a big part of what we do weekly. Having a new one to jump into is a very welcome addition to our rotation. On top of that, Czerka Corporation has always been a really fun theme in the game and I'm glad to see they are still operating in all their corporate glory.

We want to thank Max and Sema for taking the time to sit down with us, and we hope you enjoyed the interview with two members of our Content Creator Program!
- The SWTOR Community Team