Behind the Scenes of the Feast of Prosperity

Events are a cornerstone of repeatable content for Star Wars: The Old Republic. Recurring events, like Rakghoul Resurgence and the All Worlds Ultimate Swoop Rally, happen every few months, while Seasonal events only happen once a year.

Two weeks ago, we launched our newest seasonal event, the Feast of Prosperity. To get some insight into the process of creating a new seasonal event from scratch, we sat down with one of our World Designers, Allison Berryman. During this behind the scenes look, we discussed why we created a new seasonal event, why we included certain game mechanics, and more!

Let's do a quick introduction! Long-time forum readers may recognize your name, but what do you currently do on the SWTOR team?

Yes, hi! You may recognize me from long, long ago around launch, when I was a Senior Community Coordinator, or from the forums (where I think my name may still be on some of the stickies...). A couple of cross-country moves and a career change later, and now I'm a World Designer! I collaborate with our awesome team to build and script missions, write some dialogue, and I've designed a couple of recent events--I get to do a lot of cool stuff in the game.

Recently we launched our Feast of Prosperity event, which is still ongoing. What made the team want to create a new seasonal event?

There were plenty of reasons to make a new seasonal event, but one of the main motivators for me was to make the galaxy feel more lived-in. Since it only comes around once a year, the Feast is definitely something to look forward to, but beyond that, it gets to exist outside the high-stakes main storylines in the game. You get to take part in a different type of story with lower stakes, but it still has interesting choices, new allies and adversaries, and opportunities to express your characters, too. I think having both kinds of stories is a key ingredient to a galaxy that feels truly alive.

It also enables us to build Missions that let us (as Designers) play around with gameplay concepts that haven't been explored in SWTOR much and might not fit in with some of the main story updates--big shout-out to Dave Shramek for his work on the awesome Cantina Rush! That kind of experimentation makes us all better designers, and in turn means we can produce better content. And, of course, having a variety of events happening throughout the year helps keep things feeling fresh and interesting and gives players more to do. 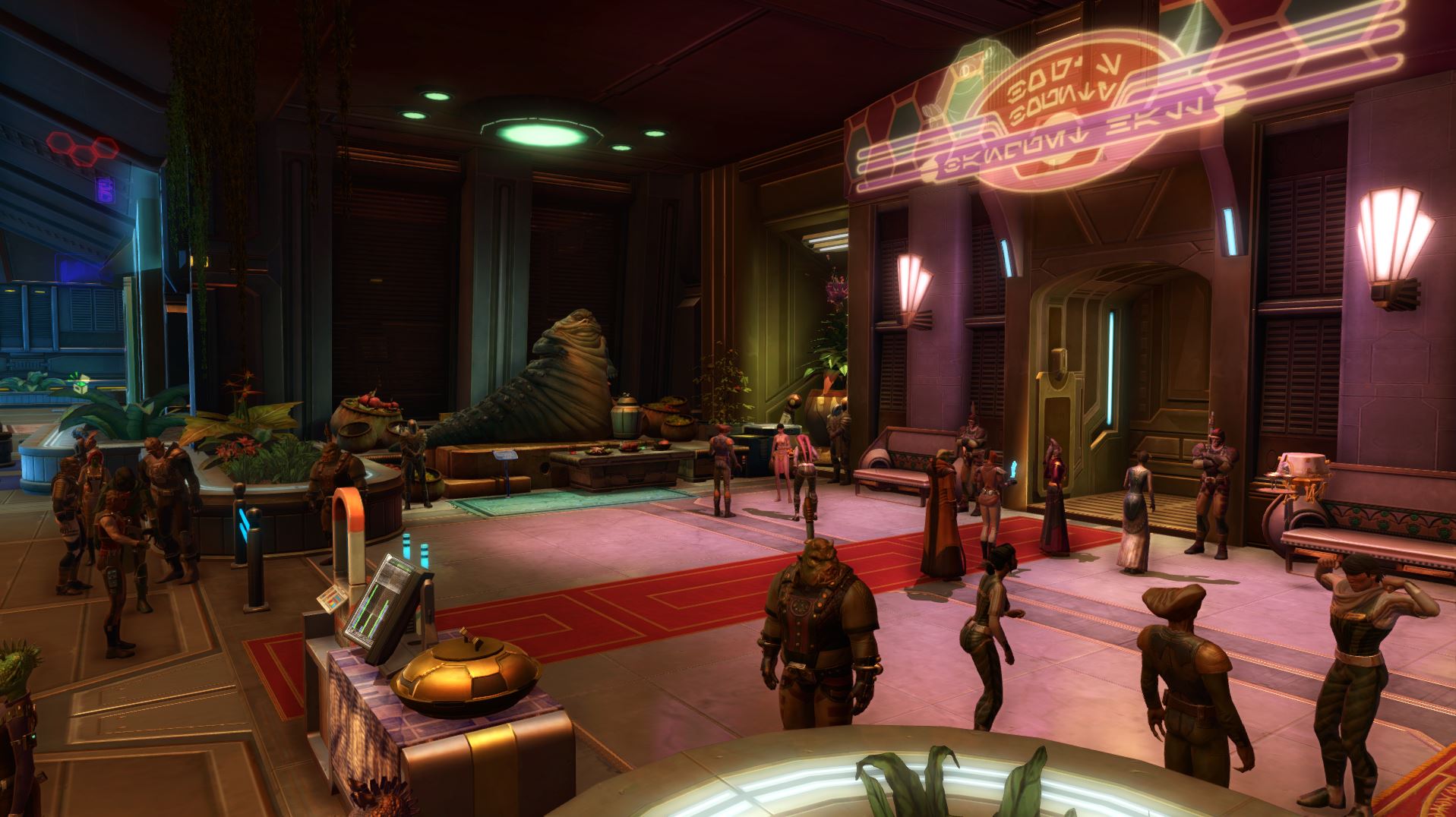 Why the Hutts? What was appealing about bringing them front and center for this event?

When we were in the initial brainstorming phase for the new event, we knew it was going to happen in the fall and that it would focus on themes that we commonly associate with that season. Feasting was, of course, a popular concept that spawned tons of fun (and often hilarious) gameplay ideas--and who's going to throw a better feast than a Hutt? No contest. Hutts were a part of this from the get-go.

Without giving too much story away, it gave us a narrative opportunity to take a look at two very different Hutts with contrasting personalities while establishing a new holiday that made sense for the galaxy. It also allowed us to take a bit of a light-hearted tone, which is a nice psychological break from having the fate of the galaxy teetering in the balance before you.

Duuba and Gaboorga were really fun to write, and I have to do another shout-out, this time to Caitlin Sullivan Kelly for polishing their dialogue up to a sparkling shine! I think everyone's going to enjoy getting to know them and ultimately determining the fate of the Feast.

The Feast of Prosperity includes things players don't see in our other seasonal events: World Bosses and mini-games. What drove these design choices?

For this event, we wanted to present a variety of repeatable activities to give everyone something fun to do while progressing toward the rewards. You can play the two mini-games, you can gather ingredients on your own, and you can group up to take on a world boss every day. If there's a type of mission you particularly like, maybe you want to do those most days, but even if there's a type you prefer to play less of, the weekly missions can still be completed without being too time-consuming.

I already talked about how the mini-games let us explore some interesting gameplay, but another thing I personally enjoy is having a reason to go back to worlds I haven't visited in a while (for worlds where that makes sense, of course!). This wraps around into having a galaxy that feels alive, I think. Just because the planet's story arc is over or my main story doesn't involve that planet anymore shouldn't mean there's never a reason to go back.

I also liked the idea of giving people a reason to take on some of the world bosses. Fighting a big, tough enemy with a team can be really fun, but it's not always easy to get a group together for them, so hopefully this will give some folks who haven't fought them before an opportunity to do that (and give those who have fought them a chance to share their knowledge and help newer players or their guildmates). 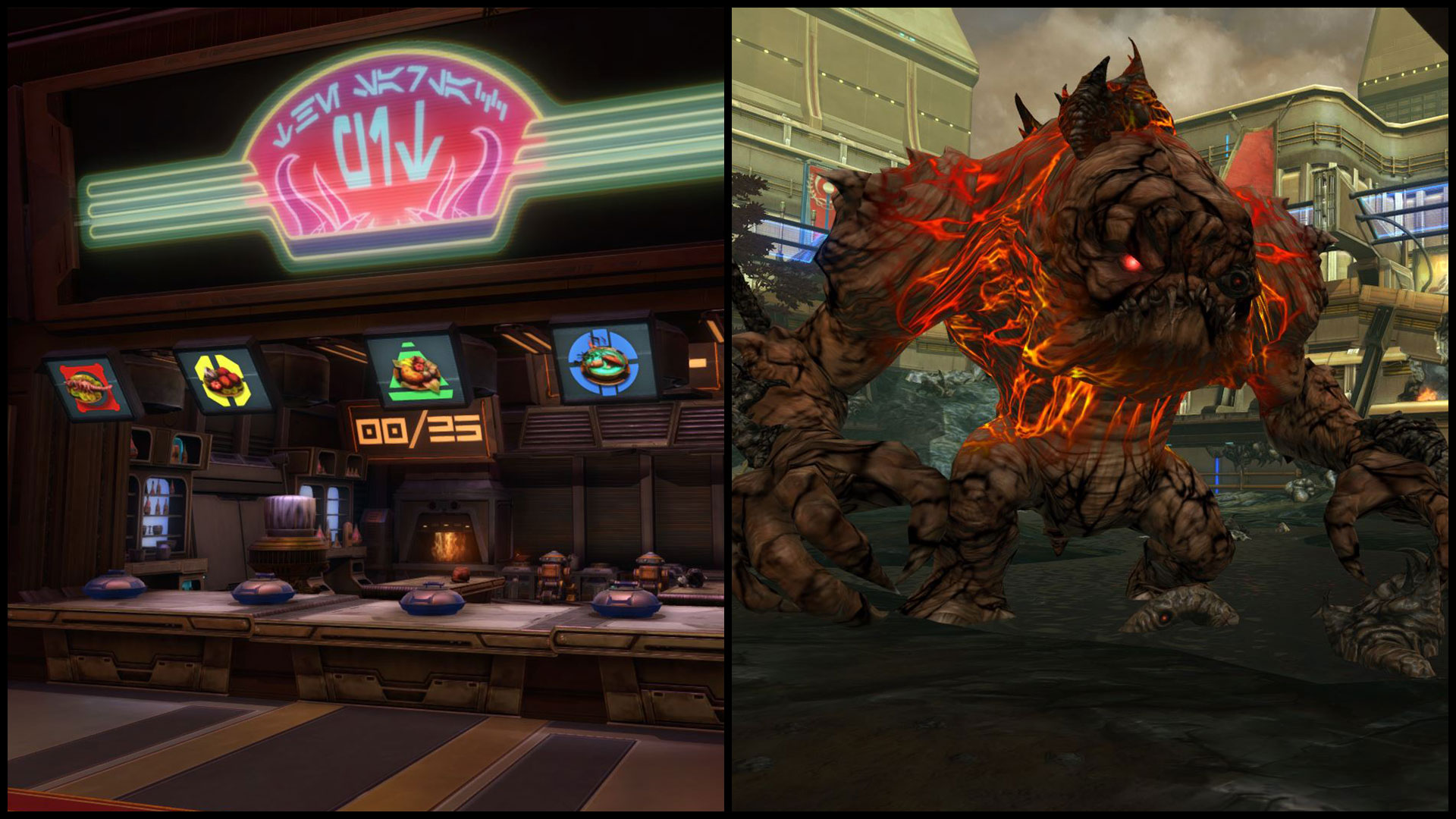 Another new functionality in this event is how the Story Missions unlock. Instead of making the whole story available at the beginning, a new Story Mission will unlock each week. Can you tell us more about this decision?

For a little context, let's look at the last event we tied some story into. For the All Worlds Ultimate Swoop Rally, the story progresses as you gain reputation with each gang. We didn't include a new reputation track for the Feast, but we liked the feeling the Rally had of having a story continue as time passes and you work with the characters. By releasing a new mission each week, players will still get that feeling and have something new to look forward to each week of the Feast.

On the other hand, because the Feast happens relatively infrequently, we didn't want to punish anyone who can't play every week and do the missions as they come out, so once a mission is released, the previous missions leading up to it can be done one after another. That way, if you can only join us during the last week of the Feast, you'll still be able to see the whole story.

To wrap things up, what is your favorite part about the Feast of Prosperity event?

I'd say my favorite part is the story (though getting to work on the cooking mini-game is a very close second). I can't talk about that too much, though, or I'll spoil things. To wrap up, though, I'd like to thank everyone on the team in art, world and systems design, cinematics, engineering, QV, VFX, audio, production, and everyone else who supports us. None of us do anything in a bubble, and it takes a lot of work from everyone across our whole team to make any of the content you see in the game. The SWTOR team is full of incredible talent, and I'm fortunate to work with such excellent folks. And, of course, we wouldn't be here without you, the players, so thank you for playing and I hope you'll enjoy the Feast! Say "hi" to Duuba for me.

Thank you for your time, Allison! As a reminder, this is the final week that the Feast of Prosperity will be active. You still have plenty of time to tip the scales in favor of Gaboorga or Duuba. If you'd like to know more about Game Update 6.1.4, read more here.