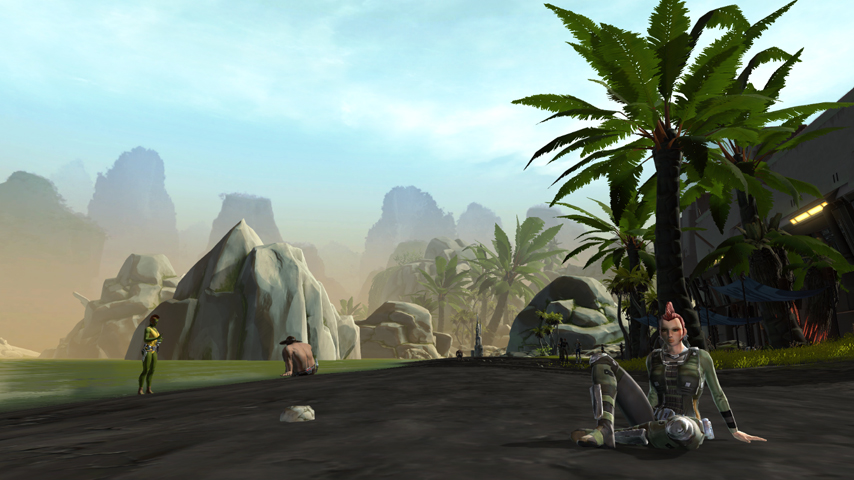 Been out to Rishi again recently, thought I'd share some snaps I took. I know you keep saying you'll go take in their sun and sand and such, but maybe this will convince you for real! 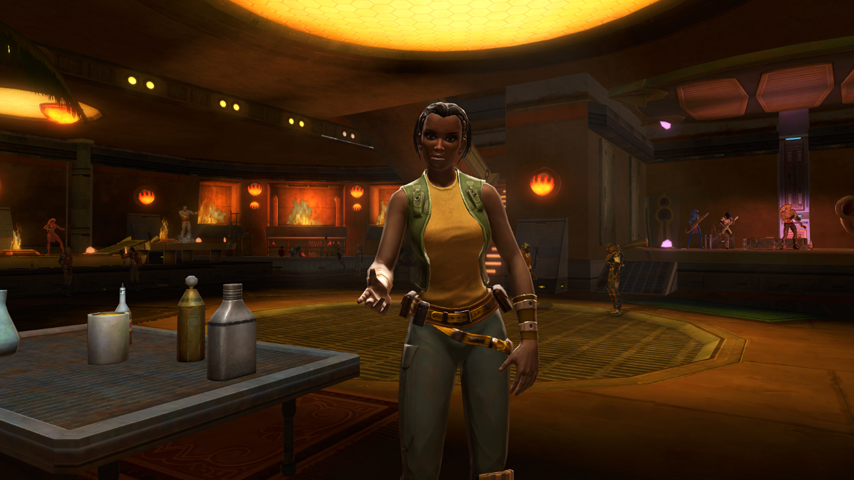 This lady's Kareena. She owns the Blaster's Path cantina in Raider's Cove. Great place to get into trouble, I love it! She keeps trash talking her cantina, but it's got lots of space, good drinks, real authentic Rishi feel, and it's right on the beach for when the weather's nice--which is pretty much always! 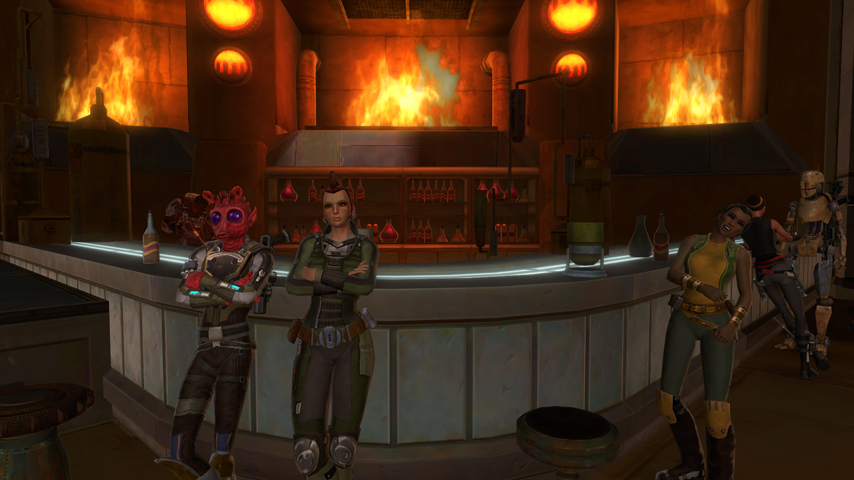 Me and Gorro in the Blaster's Path. Gorro was named Supreme Hunter of the Goa-Ato, which is like the Great Hunt but for Rodians only. In fact, a lot of Supreme Hunters go on to compete for Grand Champion. Gorro didn't, though. Shame, I think he'd have had a chance! 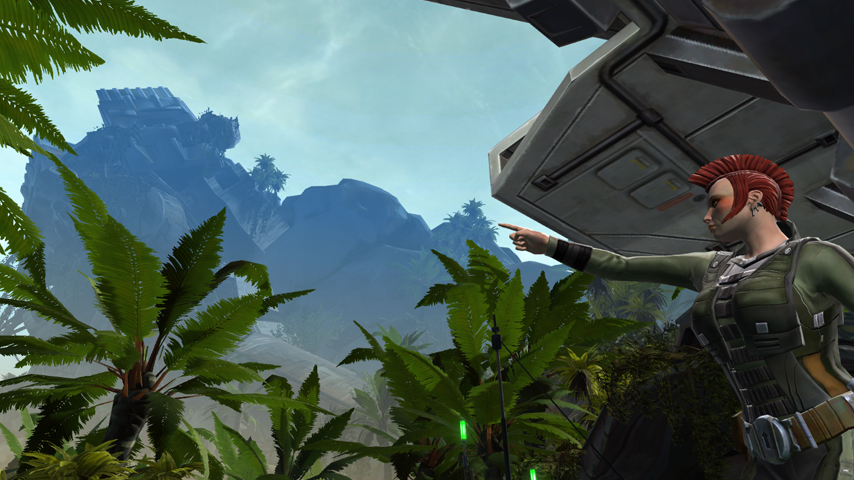 See that? Crash a ship that size and you'd expect the scavengers in a place like this to turn the hull into a big old skeleton eventually! But this particular wreck belongs to the Nova Blades. That's the crew that runs things around here. They turned the inside of that heap into their headquarters. Every now and then their guy Margok finds his way out of there and into town, but you know how my skin bristles near anyone who walks like they're King Big Shot, so I don't pay him much mind. Be neat to see the inside of that ship, though, don't you think? 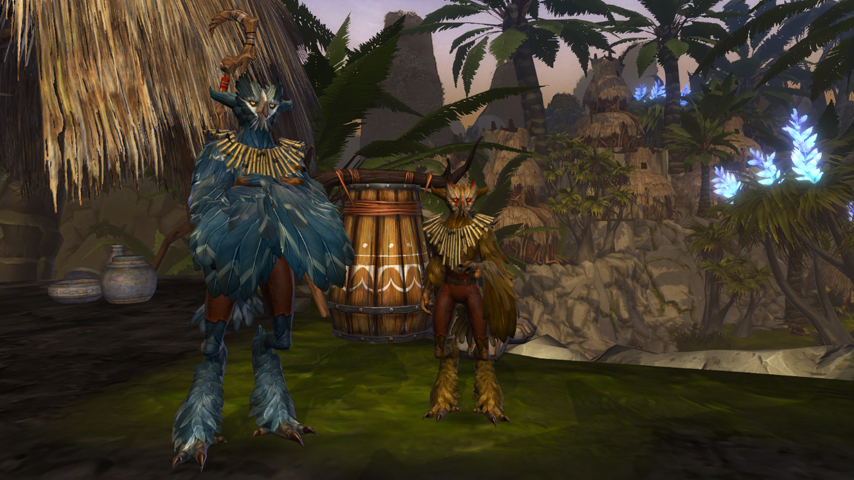 This fella's one of the natives. They call themselves Rishii, and they are an interesting bunch. Real curious folks. Pick up on languages and dialects and turns of phrase like nothing I ever seen before! They're generally pretty hands-off, don't really get involved or squabble, but some of them have really taken to the whole smuggler/bandit/pirate thing. 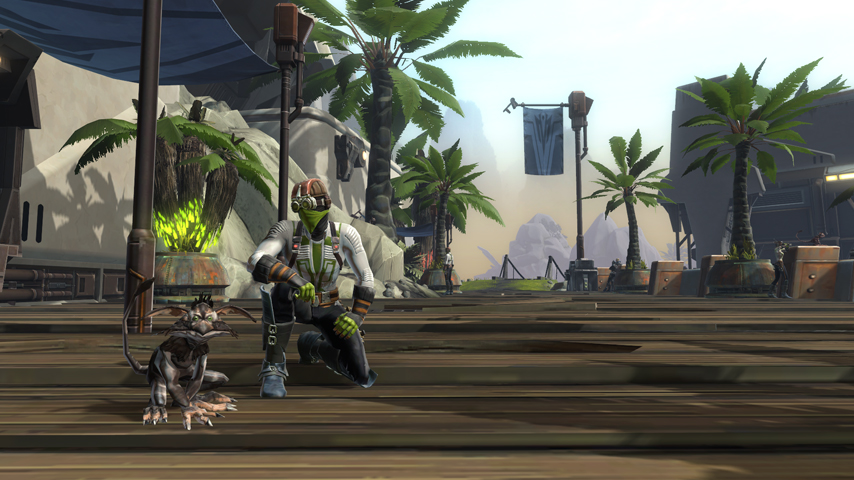 Speaking of pirates, Rishi is loaded full of ‘em! When I first ever came to Raider's Cove, it was rowdy but a bit on the quiet side. Now crews from all over the galaxy seem to have some sort of presence here. White Maw, Death's Claw, Scoundrels, Ravagers, Nova Blades--you name it! My favorite are the Carida Corsairs. They got these sassy monkey-lizards at their sides, just a riot!

Wouldn't you know it? Used to be there were a bunch of Mandos I partied with in Raider's Cove, but now they don't come around no more and no one'll tell me why! Well, turned out my favorite drinking buddy came back to town, but by the time I found out, this was the best memento of our fun times I could manage. Wonder where they're living and what in the stars they're up to! 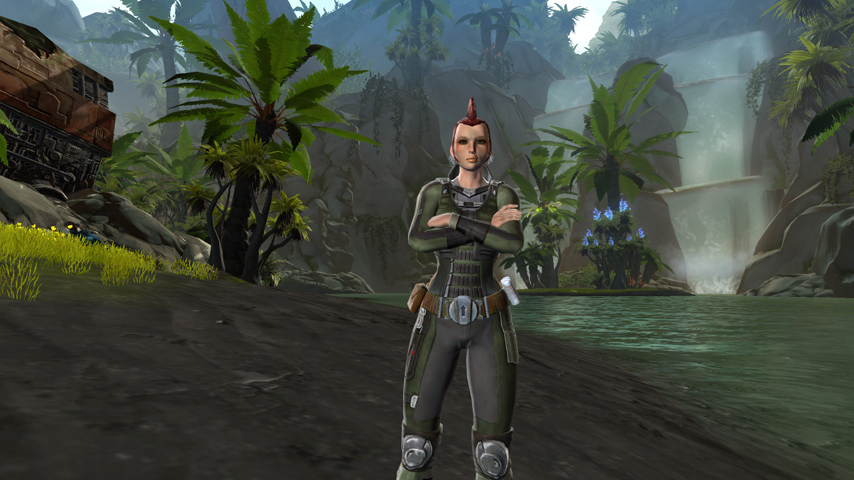 Well, I'm sure the rest you'd just find embarrassing, seeing the old lady whooping it up and getting into mischief, so that's all I've got for you this time around! Next time I touch down on Rishi, though, I better hear all kinds of stories from the folks around Raider's Cove about how you outdid me! Try not to be a stranger, okay?