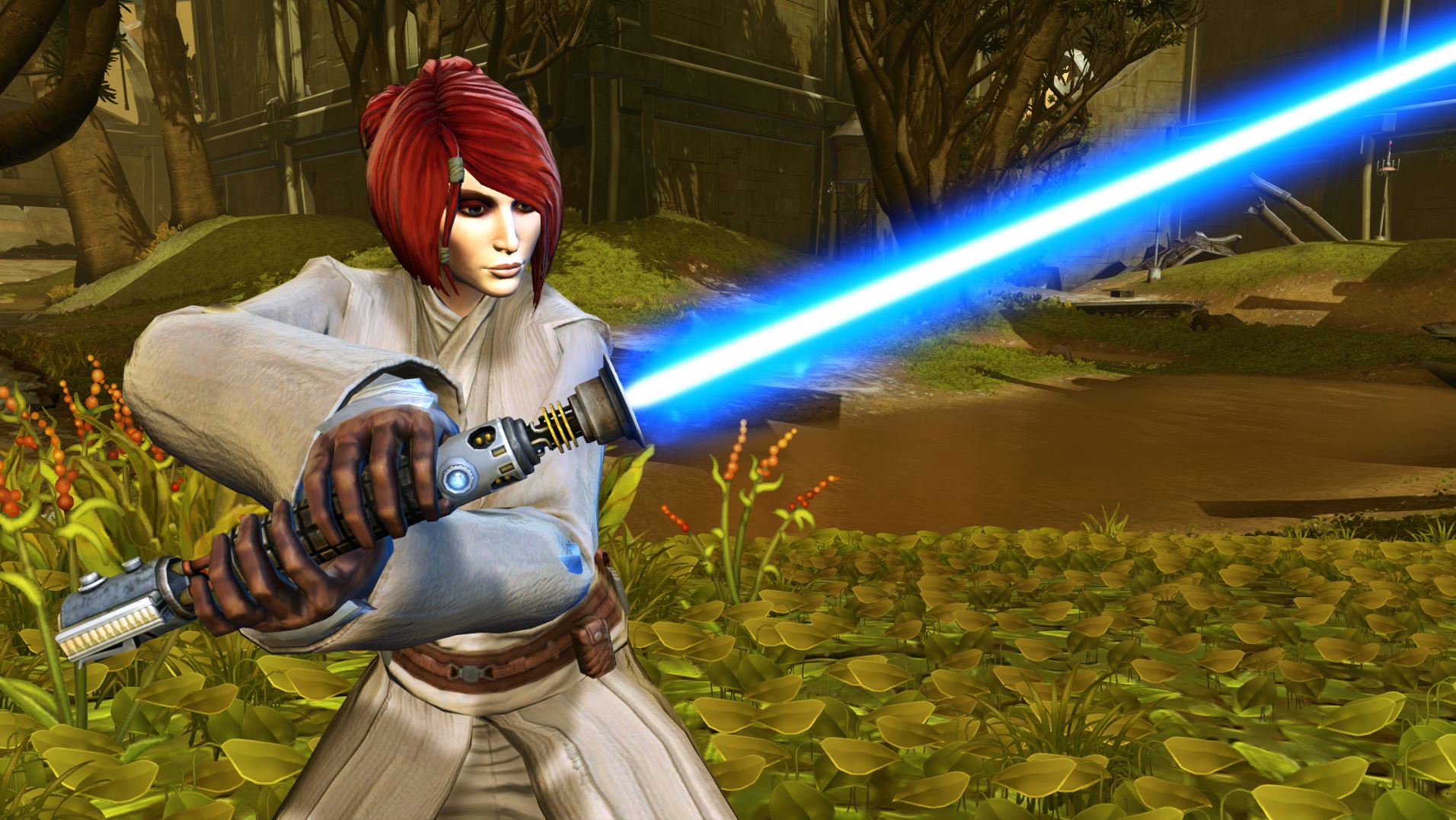 In our July Legacy of the Sith announcement stream, we shared some high-level information about Combat Styles and Loadouts. With several Combat Styles now available on our Public Test Server and the introduction to Legendary Items, we wanted to dive further into how gearing and itemization will work in 7.0. The feedback that players have provided over the years has always helped us shape the future of Star Wars™: The Old Republic™, so we are excited to talk about what to expect with Legacy of the Sith.

Our philosophy for gearing and progression in 7.0 is to ensure that players have the gear they need to play the content they want and that they can grow their power over time. Whether a player is here for the story or to take on the most powerful challenges in the galaxy, we want there to be something a player can look forward to that makes their characters stronger.

Legacy of the Sith (7.0) will be reintroducing the vertical progression path for gearing. This type of progression is not new to the game; however, 7.0 will offer players new experiences and ways to obtain gear. Within a game update, a player can regularly work toward getting stronger and know that more power is on the horizon.

Another key component of our philosophy is to remove randomness (referred to as RNG) from the equation as much as possible. When RNG is used often, it causes a variety of issues, such as inflation in the game's economy, bloat in a character's inventory space, and removal of player control in acquiring and equipping gear. The Renown system was meant to mitigate issues caused by RNG by providing alternate opportunities to earn gear; however, it wasn't effective in that goal. Issues caused by RNG can lead to a frustrating gearing experience, and we want to remove these hurdles.

There are two points players should keep in mind when it comes to upgrading their gear in 7.0. The first is that weekly content will be the fastest and most efficient way to obtain upgrades. Secondly, risk is rewarded. If a player chooses to complete content on a higher difficulty, they will be rewarded with better gear.

The majority of gear upgrades will be offered through weekly mission rewards or by trading in reward gear to purchase an upgrade. When a player receives an upgrade as a mission reward, that upgrade will affect the player's lowest rated equipped piece of gear. If it is being traded in, the player can decide which piece of gear to upgrade instead.

Instead of dealing with a large quantity of drops from bosses, players will receive one of two possible progress rewards: a type of currency that can be traded to a vendor as part of the gear upgrade flow or rewards that can be used towards an upgrade.

What does this mean for the randomness component that players are used to experiencing? As mentioned above, RNG and the RNG associated with the Renown system did not have a significant positive impact on the experience of the player. To support our philosophy about RNG, we are removing Renown and nearly all RNG in the 7.0 expansion.

Furthering our efforts to build a fulfilling experience for our players, we will be featuring different content on a weekly basis in 7.0. This content will rotate on a schedule to prevent farming of one specific piece of content, which has a negative impact on a player's overall experience.

As an example, Group Finder will only feature a limited set of Flashpoints and Story Operations each week. Players who queue for this random set will earn a guaranteed upgrade to their lowest equipped gear slot as their weekly Group Finder reward. Players can run the content multiple times per week, but the guaranteed upgrade mission reward will only be awarded for the first three runs. Beyond the first three runs, players will receive currency that can be used towards upgrades.

With this updated flow in mind, let's expand on what's known as the gearing ceiling. New and more powerful gear will be released with each new major update, but game balance will remain the same throughout 7.0 patches. Content that may have been too difficult or intimidating at launch will eventually be out-geared, giving players an opportunity to level up to higher difficulties and also learn the mechanics of the content at their own pace. As expansion updates get released, we will also raise the "floor," or the power of base gear, so new players who happen to join the expansion at a mid-way point aren't left behind by this power growth.

Let's take a look at what this could look like with example item ratings:

Players will start earning gear with a 308-318 item rating from levels 75-79. In 7.0, once a player reaches level 80, the base progression gear rewarded will be item rating 320. Gear obtained via Conquests can be upgraded up to item rating 326. In a future update, the base gear rewarded in that same content would be 322, and the upgrade limit raised to 330. These specifics are subject to change as we go through additional testing and feedback.

Nearly all gear that is rewarded and upgraded will be static and non-moddable to allow for a more convenient upgrade path for the player. Comparing stats and upgrading gear will greatly improve and become easier to understand. Players will still be able to use moddable gear, but this type of gear is not required for players to be effective in any content in the game. Access to a moddable gear vendor will be granted at item rating 334, which is the highest possible gear rating attainable in the major game update following 7.0. We plan to provide that additional layer of stat customization to those players who prefer to min/max their characters between major updates.

You may be wondering how aspects of customization, other than mods, are impacted by everything we discussed above. In short, Amplifiers did not add value to the player experience, so we are removing the system from the game. We are reevaluating how to handle stat customization post-7.0, which may include bringing back Amplifiers in a different form. This evaluation will take into consideration the behaviors we see in-game and player feedback.

We want the gear upgrade experience to be as smooth as possible, so we will be keeping the existing Augments at 7.0 launch. As we stated above, we're taking a closer look at how to handle stat customization going forward, including improving the interaction between stat customization and other systems, such as crafting. For the time being, the existing Augments and Augmentation Kits will still be usable on 7.0 gear.

All of that being said, how does it fit into the various types of content in the game? Below is a breakdown of how gearing will work with playable content, including an expected flow for each type.

Running a random Featured Flashpoint via Group Finder each week will yield a guaranteed upgrade to the player's lowest equipped slot, unless the player is already equipped with fully-upgraded gear. In this scenario, players will receive gear that can be disassembled into currency that can be used for future gear upgrades.

In a future update, this max would increase to item rating 328 for Veteran players, and item rating 330 for Master players.

Players who wish to enjoy a solo-only experience will mostly upgrade gear by completing Personal Conquests. Using our example numbers above, if the base item rating is 320 in 7.0, upgrading via Conquests can get players to a max item rating of 326. In a future update, this would increase to item rating 330 for Conquest players.

The PvP gearing structure is similar to the Flashpoint gearing flow discussed above. Weekly Missions will award guaranteed gear upgrades, and crates for match completion will award upgrade materials and sidegrades that can be disassembled into upgrade materials.

PvP Warzones and Arenas will feature both a statistical floor and ceiling. This allows a wide range of participants to join, gives a clear gearing and upgrade path exclusively through PvP activities if desired, and will stat cap anyone joining with higher rated gear than allowed. At 7.0's launch, PvP activities will award base gear starting at item rating 316, and allow for upgrades up to item rating 326. The floor and ceiling of gear earned via PvP Warzones and Arenas will all rise over time. We will share these details at a later time.

Operations will be divided into two categories: Legacy Operations and Current Operations.

Legacy Operations, or all Operations not introduced in the Legacy of the Sith expansion cycle, will allow upgrades with item rating caps determined by difficulty.

Current Operations will operate a bit differently. Gear tokens will drop directly from bosses and will be tradeable among the group. For example, after defeating one boss, a player may be awarded with a token for Pants with an item rating of 328. They could then either turn in the token and choose their piece of gear or trade it to another player. We believe allowing players who participate in large group content to gear up others quickly mitigates changes in the group dynamics when leaving or joining the group and is a crucial piece of this type of gameplay.

We are excited for the possibilities the new systems in Legacy of the Sith will provide us and our players in terms of improving gameplay, customization, and overall experience with SWTOR. We look forward to sharing more information as we build up to celebrating both the launch of 7.0 and our 10 year anniversary!

TORCOMMUNITY AND RELATED PROPERTIES ARE TRADEMARKS OF GAME RUSH, LLC. © 2008-2021 GAME RUSH, LLC. ALL RIGHTS RESERVED.
LUCASARTS, STAR WARS AND RELATED PROPERTIES ARE TRADEMARKS IN THE UNITED STATES AND/OR IN OTHER COUNTRIES OF LUCASFILM LTD. AND/OR ITS AFFILIATES. © 2021 LUCASFILM ENTERTAINMENT COMPANY LTD. OR LUCASFILM LTD. ALL RIGHTS RESERVED.
BIOWARE IS A TRADEMARK OF EA INTERNATIONAL (STUDIO AND PUBLISHING) LTD.
CONTENT AND MEDIA ARE DISPLAYED ON THIS SITE FOR EDUCATIONAL, INFORMATIONAL, AND RESEARCH PURPOSES ONLY UNDER 17 U.S.C. § 107 FAIR USE, ARE SUBJECT TO COPYRIGHT TO THEIR RESPECTIVE OWNERS, AND SHOULD NOT BE DOWNLOADED, REDISTRIBUTED, MODIFIED, OR SOLD WITHOUT THEIR EXPRESS CONSENT. ALL DATA ACCESSIBLE ON THIS SITE IS INTENDED FOR STAR WARS™: THE OLD REPUBLIC™ FANSITES ONLY AND MAY NOT BE USED IN ANY OTHER APPLICATION.
THE VIEWS AND CONTENT EXPRESSED ON THIS WEBSITE ARE WRITTEN BY INDIVIDUALS AND DO NOT NECESSARILY REFLECT THE VIEWS OF GAME RUSH, LLC.
Support Us
Follow @TORCommunity
Top