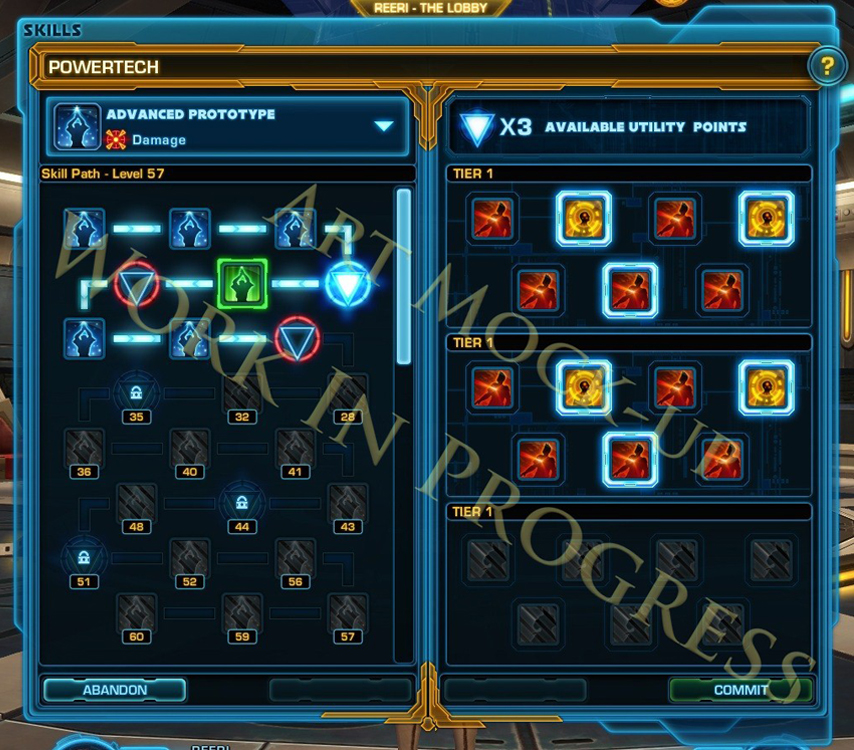 Today, we bring to you Disciplines, a major overhaul to the class system that will be coming live with Game Update 3.0! At its very core, the Disciplines System replaces the current Skill Tree system while offering a wider array of impactful utility choices to expand their character and the ability for a character's identity to surface much earlier in the level path. The Disciplines System changes the way we think about and develop the classes themselves, which will translate into a more balanced game and the capacity to expand levels and abilities more often. We're excited about this system and the possibilities it unlocks for the future.

Say Goodbye to the Skill Trees

After much discussion, the Skill Trees that have been with us since the launch of the game have been removed. While we hope to maintain the feeling of progression with each level, players will no longer get a single point every level to invest in an array of skill boxes that we felt resulted in the burying of class identity, uneven power gains, and crazy-town rotations, depending on where you were in the tree. Instead, we created three Disciplines per Advanced Class, named and themed after the original Skill Trees (for example the three Disciplines for Commando are Combat Medic, Gunnery, and Assault Specialist, all very familiar names, themes, and play-styles from the skill tree era). For each of these disciplines, we took a look at all of the skills from their tree ancestor and imported everything that defined the identity and rotation of that tree and laid them out in a level-based progression, along with quite a bit of combining, cutting, creating new, and balancing along the way. No longer are you forced to purchase skills that are, in essence, necessary for your character to function; you simply get them automatically as you level up and progress down what we call the Discipline Path. Much like the old Skill Trees, each path is made up of active abilities, passive abilities, and a new type of progression concept called a utility selection, which we'll explain later in the blog.

A Little Discipline is Good for You

From a player's perspective, interacting with the Discipline system couldn't be easier. Our goal was to design an elegant system that brings forward class identity without sacrificing the challenge of mastering your role in the process. We have combined the interface and process of taking an Advanced Class and discipline all into a series of linked panels that you access in much the same way you previously accessed the skill tree.  Once you are level 10, you can simply open up that interface and are presented with the options for each Advanced Class available to you. After selecting an Advanced Class, the next panel of the interface describes each of the three disciplines available and allows you to select one. You can preview each of them to see what they are all about, and once you see one you like, you simply select and commit it! The chosen discipline path is automatically set to your current level, so if you want to abandon and switch disciplines (similar to resetting skill points on the trees), you can take on the challenge of a new role with ease. To make sure newer characters could immediately feel the identity of their chosen discipline at level 10, we've made sure that the very first things you get tend to generate a big impact to the type of character you want to be:  healers get a nice heal, tanks get good defense/threat, and DPSers get a nice attack ability for their rotation. Tanks no longer have to grind 30 levels before they really start getting "Tanky" abilities; they can start being tanks right away.

What are Utility Selections

One of the most important goals for Disciplines was to make sure that the player had real choices that actually mattered as they advanced throughout the game. So after we finished pulling out all of the skills that we thought were really important for a Discipline's play style and rotation, we took the remaining skills from each of the three Advanced Classes, cut some of the extraneous ones, created some exciting new options, polished old favorites, and put them into a selection pool available to all members of that Advanced Class.  The end result is greater versatility. As an Engineering Sniper, do you want to gain AE damage reduction when you entrench? Well now you can, it is no longer for Marksmanship only. Each Advanced Class's utility selections are divided up into three tiers, with each tier requiring a certain number of utility selections before unlocking. We also wanted to make Utility selections quick and easy to change around, so as long as you aren't in the middle of combat you can bring up your new discipline window, reset your utilities, and quickly choose new ones.

While Skill Trees appear on the surface to provide flexibility and choice, in practicality they give very little of either. Players of a skill tree all tend to take the same skills in roughly the same order, with only minor variations on which utility choices they pick up by the end of their leveling system. With Disciplines, we can focus on creating strong and fun play styles from level 10 on, without having to worry about how people are spending 50 skill points and whether some people are making bad decisions or if others are finding crazy untested combinations that vastly exceed what we want to happen. Attach to that the idea of expanding the amount of and type of utility each player has access to and you get a system that creates better and more balanced characters with a stronger identity while allowing players actual choice. We also continued to run into a significant problem expanding the Skill Trees for level cap increases: development time. Each of the Skill Trees were balanced based on an assumption of points and how players must spend their points to get what they need to perform in combat. When we add more points (as well as more skills themselves) to the trees during a level cap increase, all of that balance is thrown off kilter and must be reset for every Advanced Class. This results in a massive amount of time spent every level cap increase simply redoing and rebalancing the Skill Trees over and over, preventing us from spending time actually doing cool new things. So to sum up, we've created Disciplines for stronger and earlier role specialization, more utility, more flexibility, better balance, and more development time for class improvements - letting our designers do more for you!

Get Ready for Disciplines

When you log into the expansion for the first time you will be prompted to choose your desired Discipline and utilities, and you are off and running. With this reorganization of the class system we've strengthened the identity of each class path and made the choices a player has available immediately impactful to their character. Coming up we are going to do a blog for each particular discipline for every class, so you can really get a feel for the changes coming to your specific style. We'll also show off all of the cool new things we are adding to the classes thanks to this flexibility. All of this is just the beginning of the journey – we can't wait for your feedback!