In the midst of the ongoing war between the Sith Empire and the Galactic Republic, a long-hidden sect of extremists has emerged, led by the enigmatic former hero of the Jedi Civil War - Revan. These "Revanites" are mustering an army with an apocalyptic plan that will leave the Republic and the Empire in ashes.

Prepare to face Revan and his fanatical followers as you adventure through five new levels of story-driven Star Wars™ missions, reach new heights of power at an increased Level Cap of 60, explore exciting worlds and fight new high-level multiplayer Flashpoints and Operations in the Digital Expansion, Shadow of Revan!

Not a Subscriber? Upgrade Now. 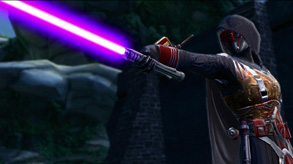 Embark on an epic new storyline with full voiceover and dramatic cinematic moments as you prepare to face Revan, one of the most powerful characters in The Old Republic era. 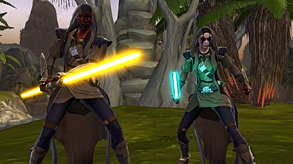 Power Up with Five New Levels

Continue your Star Wars saga with an increased Level Cap of 60 and obtain powerful new abilities and equipment as you advance to new heights of power! 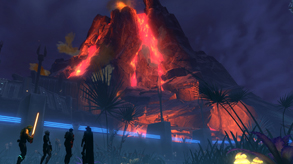 Travel to the tropical world of Rishi, a dangerous pirate haven at the edge of the galaxy, then continue your story on Yavin 4, home of the fearsome Massassi warriors!

*The new Discipline System is a game-wide update that will be released with Game Update 3.0 at the start of Early Access on December 2, 2014.

Q1: WHAT IS THE LAUNCH DATE FOR THE DIGITAL EXPANSION, SHADOW OF REVAN?

Q2: WHAT FEATURES WILL BE AVAILABLE DURING EARLY ACCESS?

The full slate of features will be available at the start of Early Access on December 2, 2014.

Q3: HOW DO I OBTAIN MY "GRAND STATUE OF REVAN" PRE-ORDER REWARD?

If you pre-order the expansion by December 1, 2014, at 11:59PM PST / December 2, 2014, at 7:59AM GMT, beginning December 2, 2014, you can claim your “Grand Statue of Revan” centerpiece decoration by visiting Jaygon Rannis, the Herald of Revan, who is located next to the Security Key Vendors on the Republic and Imperial Fleets. Using the vendor requires you to have a valid pre-order for the Shadow of Revan expansion. You may unlock up to ten Grand Statues of Revan for your Legacy.

Q4: HOW DO I GET THE CLASS EXPERIENCE BOOST PRE-ORDER REWARD AND HOW DO I USE IT?

The Class Experience Boost is immediately effective for all players with an active subscription status and who have also pre-ordered the Shadow of Revan Digital Expansion during the pre-order period ending December 1, 2014, at 11:59PM PST / December 2, 2014, at 7:59AM GMT. Players receive a boost to the amount of XP gained from Class missions, allowing them to advance to Level 55 at an expedited rate while enjoying their Class story missions (the exact multiplier is 12.32). Legacy Class XP perks and Cartel Market Class XP consumables do not stack on top of this boost. Guild XP bonuses and General XP consumables from the Cartel Market do stack on top of this boost. The Class Experience Boost is only effective while you are in active subscription status during the pre-order period.

Q5: HOW DO I GET THE RISE OF THE HUTT CARTEL DIGITAL EXPANSION?

About the Author
Author: Hayward
back to top